What a wonderful morning! Up at 6.30am in my faded purple robe, waited upon by Deb, my hostess. A blanket is wrapped round my legs, her jacket lies across my shoulders, as I sit on the open patio watching the rising rays of the sun reveal the plains below. 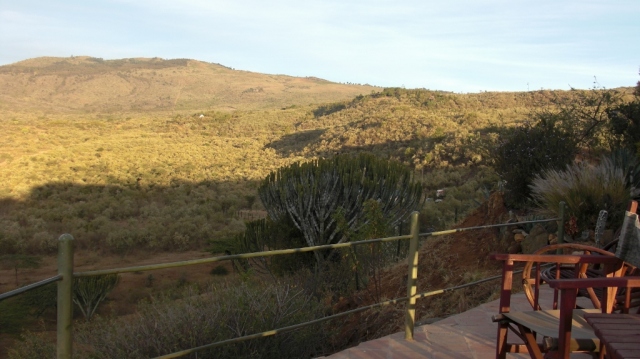 Looking towards the Eburu Hills

A family of impala skitter across the parched plains. Some Grants gazelle shoo away a lost impala youth. Zebra clip-clop below me from right to left, a group of warthog wallow in a mud patch near a fringe of forest. Then five buffalo appear out of nowhere to water at the trough set there precisely for the animals. There’s a rock of natural salt beside it, which lasts a week. One lasted only a day, Deb told me, and she suspects the nearby encampment with their fenced boma for goats and cattle.

“They would have sold it to a duka in Naivasha,” she said. “It’s very expensive: Shs.1,400/-. They don’t look after their cattle properly, so the salt couldn’t have been used for their stock.” 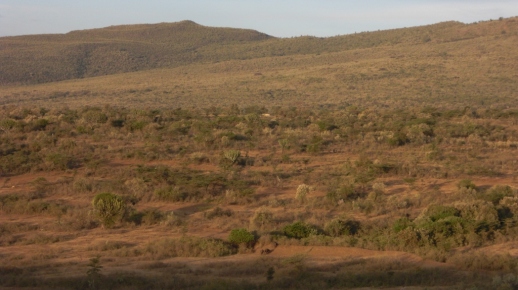 If you look in the centre foreground, you may just glimpse some buffalo.

Six weeks ago she was mauled, when walking her three Alsation dogs in the bush. It suddenly charged at her out of the bush. She thinks perhaps the dogs had annoyed it.

She yelled and screamed and ran behind a thorn tree, but the buff got her, breaking a rib. She kicked and yelled, and then it backed off for the final charge.

She thought in that brief moment it was the end.

The dogs came to her rescue, hassling and distracting the animal until it ran away. Some watu came to help; but she wouldn’t let them lift her – she was hurting too much.

Then a Green Park vehicle arrived and took her to the doctor. They found her shoes hung up on the branches of the thorn tree, she had been kicking out so wildly.

Many thorns were embedded in her leg and the scratches were still visible. The thorns are not all out yet. 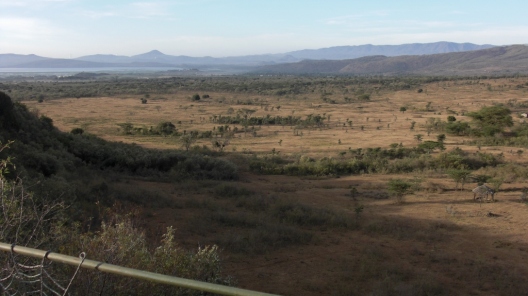 Water hyacinth has drifted in to the northern side of Lake Naivasha. Steam jets from Hell’s Gate spume in white clouds from behind the opposite hills. Eburu hilltops rise behind me. My hearing aids allow me to hear the soft trickle of water from the fish pond beside the patio. And the birds come out. I astonish myself: I can remember their names, but have to resort to Deb’s bird book to positively ID the yellow bishop. Bulbuls, sunbirds, weavers, cordon bleus, red winged starlings; a black headed oriole. Then out come the swallows as the sun rises higher.

A cooling breeze makes the chime over the front door tinkle (I could do without that). 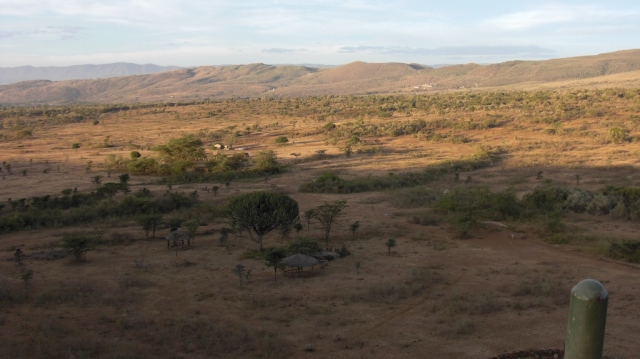 Below me a ranger vehicle has arrived. Three men stand by while one does something on the ground in the fenced compound where the cattle had been. They swat at the occasional fly and change position from time to time; three supervisors, one worker. I can hear the faint sound of a hammer as the breeze veers my way.

Behind me, Deb’s workers chat as they labour on a new ground level water tank, and move furniture and beds around as she’s expecting a large party of guests later in the week…

But I must prepare myself for that dusty road once more.