ANCESTRY RESEARCH – And the Plot Trigger was Pulled.

Isn’t it strange how things work out sometimes? Last Tuesday I hosted a blog by an author with a name for digging around her family tree. And now I welcome prolific writer Nancy Jardine to my place once again; she has “discovered” ancestry in her most recent book, Monogamy Twist. It is top of my to-read list, Nancy, I just can’t wait!

Hello Jane! It’s lovely to come back and give you an update on my writing, though I’m going to dip first into the recent past… to autumn 2010.

I wasn’t really thinking beyond my historical writing. I was redrafting what became The Beltane Choice, Book 1 of my Celtic Fervour Series but things happen in curious ways. I’d started to research my own family tree and found ancestry research a fascinating time-consuming habit. My family files were stacking up and in addition to on-line storage of details, I was making print copies. During one episode of the current BBC dramatisation of a Charles Dickens book, I was organising my ancestry research binder. That series wasn’t about Great Expectations but the plot trigger was pulled.

Maybe I should try a contemporary novel instead of a historical? Some ideas burbled around. How about a contemporary English setting and a humorous version of a Dickensian bequest plot? Someone inherits a house but doesn’t know why it’s them? Excitement grabbed me. I’d be able to tie in ancestry somewhere in the plot if the contemporary characters had to do some family tree research to find out why the bequest had been made in such odd circumstances. Not just a contemporary story but a mystery! 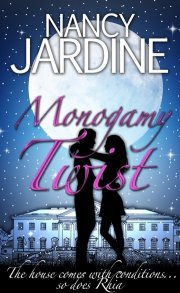 When Luke Salieri inherits a dilapidated English estate from a woman he’s never heard of— with quirky conditions attached—it’s a mystery he wants to see resolved immediately. But there’s a catch: he needs a woman to meet his needs, though just how far will he have to go to persuade her?

The job of researching Greywood Hall and its fantastic contents is enticing, but can Rhia Ashton see herself living with gorgeous Luke Salieri for a whole year and then walk away? Rhia has her own ideas about what will make it worth her while. But neither expect love to enter the game.

Monogamy Twist was conceived that night. I decided that the inheritor was going to be the male main character (Luke Salieri) and he’d be aided by a very convenient female main character (Rhia Ashton) and they’d solve the mystery together. I thought of making it an inherited Scottish castle but that didn’t ring sufficient parallels with my image of a Dickensian plot. A castle would maybe work for a version of a Sir Walter Scott novel, but I was on a Dickens bandwagon! I pulled out a map of England. The Yorkshire Dales grabbed my attention—sufficiently bleak in places and a fabulous choice for my Greywood Hall.

I wrote the story of Monogamy Twist in a mere few months, during the two-days-a-week when I wasn’t teaching. In March 2011, I sent the manuscript to a US eBook publisher who immediately declared that they’d publish the novel and gave me a two-year contract on it. However, as a ‘Romance-Only’ Press they insisted I add a lot more steamy romantic scenes to my original manuscript.

Crooked Cat has recently re-launched a brand new version of Monogamy Twist which is back to being much more like the original manuscript of my humorous, ancestral based mystery. It’s still a romantic story but the mystery drives the action more than the development of the relationships between the main characters!

I like to think that Charles Dickens was an author who was fairly flexible in his writing and hope he’d approve of my ‘borrowing’ his bequest concept to make my fun inheritance mystery in Monogamy Twist.

This April of 2015, I’m also about to publish my first time travel historical for a Middle Grade/ YA and older readership. The Taexali Game  is set in Aberdeenshire, Scotland, but my intrepid trio of time travellers are whisked back to AD 210 when the Ancient Roman Emperor—Septimius Severus—floods the area with legions of troops.

Perhaps I could return in a while, Jane? To tell you more about The Taexali Game and how it came to be written because that’s also a nice long story…

You are welcome any time, Nancy – I look forward to seeing you again.

Nancy Jardine lives in Aberdeenshire, Scotland. She currently shares a home with her husband, daughter, son-in-law, 3 year old granddaughter and 1 year old grandson. It’ll continue to be a busy household till late summer of 2015 when the new build home will be completed for the young ‘uns on what was Nancy’s former back garden. The loss of that part of the garden won’t be missed since there should now be more writing time available this spring and summer! Childminding is intermittent over the day and any writing time is precious. (If interested in how a new house is built these days, follow my blog posts named ‘Gonna build a house’ )

All matters historical are a passion for Nancy; Ancestry research a lovely time-suck. Nancy regularly blogs and loves to have guests visit her blog. Facebooking is a habit she’s trying to keep within reasonable bounds! Any time left in a day is for leisure reading and the occasional historical series on TV.

1 Response to ANCESTRY RESEARCH – And the Plot Trigger was Pulled.