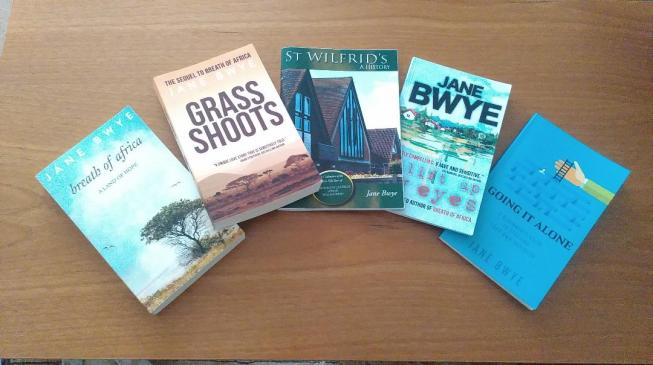 My books are out of print.

However, you can borrow my two Africa novels,  Breath of Africa and Grass Shoots from the City of Melville Library in Perth, West Australia.

Nominated for The Guardian First Book Award 2013; likened to the works of Nobel Laureate, Doris Lessing.

The book means different things to different people; it can be read as a love story, a psychological thriller, or more deeply as an exploration into the interactions of people of different races. Superstition and Christian faith clash. And the stunning beauty of the country is a major character in itself.

“Perhaps the largest theme is that of superstition. Anyone who lived in Kenya during the thirty years covered by this book knew the power that sorcery exerted on the indigenous mind. We all heard of people who willed themselves to death because they believed themselves cursed. Here the curse is inflicted by a former Mau Mau member who was imprisoned and beaten by prison guards. He harbours an intense hatred of the people who did this to him and curses their descendants. The book traces the calamities which result. Interwoven with that theme is an inter-racial affair that results in a ‘nusu nusu’ or half-white, half-black child. Perhaps a little more could be made of the prejudice that must have been felt by the mother, but one understands that the writer would not want to antagonise some white readers by portraying them as too biased. In fact, she is fair to all races, and good on the tensions of the 1950s and 1960s. The book could only have been written by someone who was there at the time, so deep is its accuracy in assessing the events and feelings of the age. It will be a nostalgic read for ex-Kenyans.” Christine Nicholls, author of “Elspeth Huxley, a Biography”

The standalone sequel to Breath of Africa.

A story of social contrast set against the backdrop of modern-day Kenya, with its vibrant and chaotic capital, its beautiful scenery and exotic wildlife.

“…I enjoyed Breath of Africa, the first book in this series, so was looking forward to reading this one. I absolutely loved it. Set in modern-day Kenya, it completes the family saga, showing a new set of challenges for the next generation and the country. The descriptions are amazing – the chaotic capital, the colourful scenery and the exotic wildlife. But the book also depicts the poverty, corruption, racial tension and violence in the country and includes events such as the election violence of 2007-8 and the Westgate shopping centre terrorist attack. I love the way these historical details give context to the story. It was good to be reunited with some of the characters from the first book and to get to know new ones. The author obviously knows the country inside out. I have a feeling this book will stay with me a long time.”  Katy Johnson, Best-selling author.

A raw story of hope and love, which addresses real life emotions and hits compromise head on. “Do I do the right thing, or do I live while I still can?”

“Take four men and one loving but unloved woman. Light the blue touch paper and stand – as close as suits you, depending on whether you prefer a dash of passion or the quiet life.

Ann’s husband, Robert, was a knight in shining amour, but has suffered a setback and is now ill in a very bad way. He isn’t the man he once was. But there is always sport on TV and radio, sometimes simultaneously. Anything to avoid making a decision. Then there is Duncan who sings in the choir. Yes, he is older than Robert, but he is still a player and he still has life in him, even though he has health issues, too. Damn annoying thing, the human body. John is Ann and Robert’s late gift. But the shine rubs off him a touch as he, too, loses his way a touch. And then there is the fourth male in the mix – God.” RJ Askew. Reuters, London.

“This book deals with a difficult subject, but tackles it bravely and sensitively. It is short enough to read in one sitting, and I found myself rushing to finish it so that I could find out how the author resolves the narrator’s dilemma. I won’t reveal the outcome here as I don’t want to give away the ending, but suffice it to say that I was kept guessing right up to the last page. Highly recommended.”  Sue Barnard. Editor and Best-selling author.

A Beginner’s Guide to Starting Your Own Business

In aid of People Matter, Eastbourne.

“Jane Bwye has had an interesting life, and her good sense and experience shine through in this inspiring and practical guide to starting a business.

Jane abandoned her studies at Oxford to marry the man she had left behind, obtaining a degree in her mid fifties. She has worked as a journalist, novelist, business mentor and B&B owner, and she has run a riding school. She has lived in the UK and Kenya, and has shown her entrepreneurial spirit and love of people wherever she has lived.

Jane’s book takes the reader through the essential steps of how to create a business. The first question Jane asks of the would-be entrepreneur is ‘Are you the right sort of person to have your own business?’ This addresses an essential first step, which is to consider carefully why the reader wants to start a business. Is it because they want to become rich? Is it the desire to become one’s own boss? Jane is not convinced by either of those reasons as a primary motivator. The would-be entrepreneur needs to have a much more convincing reason before they take on the challenges and hard work of a business start-up. This means taking a close look at one’s own skills and personal circumstances, including family commitments.

Although it can help to dream, the business case needs to be thought through and written down. This document sets out what the business will offer, and to whom. Of course, the business is intended to make money, so Jane urges that you write down what you want to do with it, and the benefits for the entrepreneur and their family for the next three, five and 10 years. Writing it down clarifies the thinking and means that the gaps and oversights can be identified, whether by the entrepreneur or the adviser or mentor.

The essential components of the business case are set out in short, easy-to-read chapters, one each for legal matters, marketing, people (i.e. customers, staff and suppliers), keeping accounts, estimating sales and forecasting cash flow.

One of Jane’s key lessons is to learn from others, especially to learn from their mistakes. Do the research. Look at other websites and similar businesses. They can be a source of ideas and can help you build your network of collaborators and helpers, rather than looking on them as competitors and adversaries.

Jane uses her rich experience of mentoring and guiding people who are interested in setting up a business as a source of lessons for the unwary. Many characters appear in the chapters, such as The Man with a Jaguar, Susan the Middle-aged Gardener, and Tom the Computer Expert. Some people make a success of their business idea, and others don’t come back after their first encounter with Jane’s patient questioning.

Whatever the business outcome, the message that comes through is that Jane loves people. She has learned how to guide all sorts of people through the personal and business challenges of stepping into a different way of life. Her own life experience has shown her that it can be tough, but that it is important to be clear about why setting up a business is the right and appropriate thing to do. Who will benefit? How will one’s family be affected? While it’s appropriate to dream, keep your feet on the ground.

Jane’s inspiring book shows that starting a business is not necessarily for the young tech-entrepreneur, but that anyone with an idea, clarity of thought and determination can create a different way of life.”

“The bookshelves are heaving under the weight of books on how to succeed in business. Make no mistake many of them are very good especially those by authors such as Steven Blank, Brant Cooper,  Seth Godin, Ash Maurya, Alexander Osterwalder, Yves Pigneur, Eric Reis, Patrick Vlaskovits and others who reveal the Lean Business paradigm.  Is there space for another?  Following the dictum that, if there is a problem there is a potential business, it seems that there is such a space because there are many individuals who just want to get on with starting their business without having to wade through tomes and they want to be assured that what they are being told has worked in practice for others with whom they can identify.

Jane Bwye has ‘gone it alone’ and told her personal story of mentoring businesses that started with almost nothing, not even much hope. In so doing she gently reveals her methodology and its proof of concept. She also provides user-friendly business planning Excel sheets with embedded formulas. If you want to start a business but have little more than a dream – read her book which is appropriately titled ‘Going It Alone’.  Once you have traction and want to go on to create your own unicorn it will still be a good segue to learning more about the ‘Lean approach’ and the exciting associated business tools.”

Please Follow this Link to my Amazon Author Page

7 Responses to MY BOOKS