Of Flaming Exhausts and Flashing Headlights

(Based on my article published by the Daily Nation, Kenya, on April 13th 1966)

Bruce drew his dirty fingernails through his tousled hair in exasperation. He was sitting in the middle of my lounge surrounded by spanners, hoses, puncture outfits and tools of all descriptions and sizes. The sheaf of papers comprising the route card was abandoned on the sofa and a copy of rally tables resided in the dining-room beside dozens of pencils waiting to be sharpened. On the veranda wrenches and tyres, soap and pep-pills were jumbled in a pile and overflowed into the garden where pieces of safety harness and bottles and bottles of an energy giving drink were scatted over the lawn. 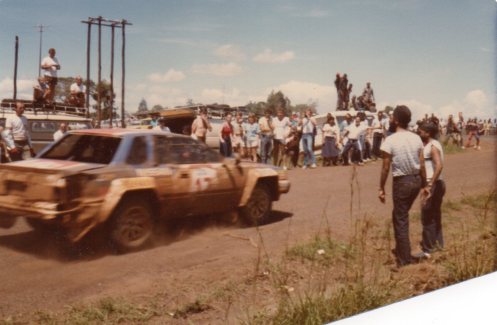 You would never have thought that the East African Safari Rally was due to start the following day.

Gallantly I volunteered to go and get the forgotten items.

That night, after attending the drivers’ briefing, we worked out average speeds, distances and times until our heads swam with dizzy numbers. Midnight, and we’d only finished the first leg.

“Never mind,” he said. “I’ll do the second leg when the time comes.”

The following morning as soon as the cars were released from bondage, there were mud-flaps to attach, spare wheels to fix in place and last-minute adjustments to be made to the engine. Then they nearly forgot to fill the spare can with petrol and to mend a faulty windscreen wiper…

All this had started the year before – in fact, from the very moment my brother-in-law had found himself irretrievably bogged on the previous Safari. I could understand his safari fever. Mine was bad enough, and I’d never even driven in a rally. Somehow the exciting anticipation of the event and the tense atmosphere before the start would just “get” me, especially if I were allowed to chase round after Bruce and ferry him from place to place.

The start never failed to thrill me – the jaunty flags, the screeching spectators, the pushing, rushing crowd. And of course the unmistakeable cars themselves with blackened bonnets and gleaming spotlights which snorted up the ramp and paused, ablaze with colourful advertisements, before skidding off between lines of yelling, whistling people.

Then I would hurry home to the wireless and for the next two days ears would be glued to the set, knobs twiddled and sometimes if I were lucky, exciting news gleaned from obscure wavebands.

Once we went onto the main road to wave the competitors by. It was a long, straight stretch of tarmac and the cars could be heard miles before they actually whizzed past, their gleaming paint now covered in mud and the numbers scarcely distinguishable in the rush of their passing. Some drivers would flash lights and honk horns, others wave and shout. Yet others would speed grimly past in desperate bids of concentration. Excitedly, we marked off the numbers as they passed and as a side-line we placed bets on cigarette ends lined along the tarmac. The person whose end was blown the farthest by the rush of the passing vehicle would gather in the stakes.

Each year we join the throng of waiting spectators at the Nakuru control. Hundreds of people crush into the veranda of the hotel and overflow onto the pavement hours before the scheduled arrival of the first car.

As the time approaches, tension mounts and heads turn at every suspicion of a honking horn or a snorting exhaust. Good vantage points are jealously guarded and there is a complete absence of manners.

Suddenly, a whisper is passed from person to person. An expectant silence descends upon the crowd and faint in the distance can be discerned the tell-tale rumble of a well-tuned engine. Closer and closer.

People push forwards and some break away to run down the road.

Whistles and cheers sound faintly along the route – and suddenly the crowd rises with a deafening roar as screams pierce the air and roof-raising cheers sound out to greet the first arrival, skidding to a stop opposite the control officials. The route card duly signed, the mud-spattered vehicle drives slowly between throngs of cheering spectators and parks to disgorge its tired occupants.

A lucky official wanders across the tarmac to gaze at the car from close quarters, a reporter disappears inside a telephone booth, and hushed questions and answers are passed from person to person as the crowd settles to await the emergence of the drivers for the send-off.

Soon, cars are screeching into the control with exciting frequency. The cheers and whistles seem to go on forever, and elation mounts higher and higher as roars accompany the arrival of popular light-flashing, horn-honking teams. Steaming cups of black coffee are passed round and empty beer bottles litter the tables. The night progresses and the crowd thins slightly.

Beyond the control ropes efficient rows of works teams wait. There is a lull. A car rolls up and stops twenty yards short of the control. I leave my vantage point and squirm past hulking greatcoats to the front ranks of the watching throng. The car is jacked up and the hiss of a blow-lamp fills the air as a sweating mechanic directs the blaze onto the front suspension. A towrope is fastened onto the arm, and with a protesting roar the engine of another car is revved up. It strains against the rope in a desperate attempt to straighten the obstinate rod, while the glaring headlights of yet another vehicle are directed onto the scene.

All the while, the driver and his navigator sit struggling with exhaustion in their seats, ignoring the sea of peering faces around them. Then he starts the engine and trickles into the control.

It is midnight and the biting cold is penetrating our sweaters. Bruce should have arrived an hour ago. Whispered rumours reach us that more rain has fallen and cars are bogged down. There are greater pauses between competitors. The trickle of news from the wireless has petered out. Then Bruce’s works team rolls up bringing news of more mud and holdups. We breathe sighs of relief when we learn that they are past the worst and should arrive in the next hour, but wonder if they have not run out of time.

We crane our necks and scramble to our feet at every tell-tale honk of a horn. But each time it is a false alarm. Anxiously we ask questions about extension of time. The minutes and hours tick by, and still no sign of Bruce.

It is not until 2.30am that their mud-spattered car grunts tiredly into the control. The two men clamber out, dulled by the drive and unable to talk much beyond the occasional monosyllable.

We press round them with hot coffee and sandwiches, but all they hanker for is the forty minute rest and the return to the road. There is a whisper that the time has been extended and we cheerily wave them out later on, with the knowledge that at least they have another hour’s grace.

Unable to prop our eyelids open any longer we fall into bed and dream of flaming exhausts and flashing headlights.

The next day we learn that Bruce, having suffered puncture after puncture, eventually ran out of tyres before limping back to Nairobi to hear that he had been time-barred. He stumbles out of the car and I take him home to sleep round the clock. He rises to discuss the possibility of obtaining a sponsored entry in the future, for there is always next year, and the next, and the next…