The Bird Telegraph must have Twanged

The Guantanamera appeared from nearby Santa Cruz, where she’d gone for refuelling.  It had been a very pleasant couple of hours.  Most of us stayed on board, but four went deep-sea snorkelling near the cliffs of Santa Cruz where shearwaters swooped and circled, the bright green-blue of the sea reflecting their undersides as they turned upwards.  On the boat, as we relaxed on the top deck, the “bird telegraph” must have twanged, as suddenly dozens of frigates swooped in, circling in a mad frenzy and hovering inches from the rails.  Below, half a dozen brown pelicans waited in an expectant group, bobbing in the water.  There was a plop, and a mad scramble of wings and beaks as a victorious pelican swallowed the booty.  Jealous frigates muttered and attacked each other, swooping and gliding above us.  Twice more, Darling, our chef, obliged.  Then as if at a secret signal, the birds disappeared.

After lunch, we made a wet landing onto a sandy beach amid dozens of other tourists.  Turtle nests revealed themselves as depressions in the sand in forbidden territory just over the brow of the beach.  Behind in the scrub were a couple of sleepy lagoons where I surprised some waders and a great blue heron.  I’m glad I found them early, because soon hordes of people arrived.  The soft sand made the going hard.  I walked to some mangroves at the far end of the beach, and  returned to take a dip in the sea.

That night, I thought I’d solved the air conditioning problem by cutting it half off from the cabin, so with two layers of clothes on, together with sheet and blanket, I was comfortable.  But Zara in the bunk below me said she was frozen.

We set off at 5 a.m. for South Plaza, and had breakfast, watching the hordes of tourists go in their groups to the landing.  At 8.30 we were the only ones left.  Billie took his time, pointing out the twenty-metre territories of a dozen sea lions, guarding their females and young.  They were extremely noisy with their aggressive barking and honking.

There were hundreds of marine and land iguanas and hybrids.  We also saw some skeletons, and Billie pointed out several rather sick looking iguanas.  The cause is unknown.

On the far side where the cliffs dropped sheer into the broiling sea, there should have been a colony of bachelors, out of reach of the territorial bull sea lions, but a solitary male was the only target for our cameras.  The others must have been fishing, said Billie.  Hundreds of shearwaters swooped from cliffs; swallow tailed gulls roosted in precarious pockets of lava and we saw a chick peeping out from under its parent.  Blue-footed boobies stood out against the dramatic scenery, with waves crashing far below. 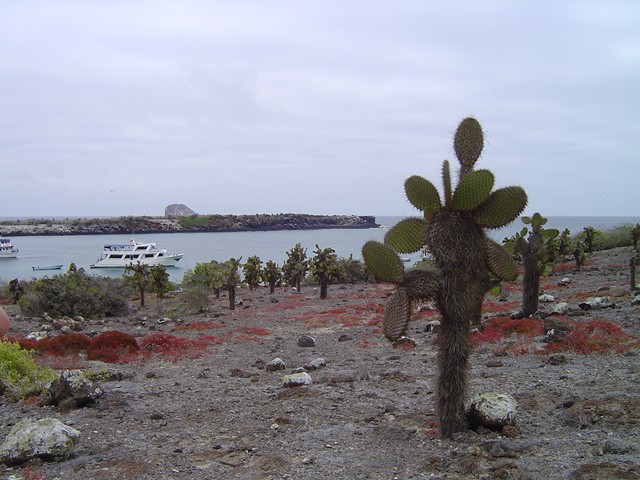 Sesuvium (a deep red plant at this time of year) was spread all over the lava in a colourful carpet, with clumps of prickly pear cacti.   The iguanas eat both, but they like the sesuvium only in the wet season when it is green.

4 Responses to The Bird Telegraph must have Twanged