New Zealand is full of surprises. I go on a long coach trip from Rotorua to Aukland through yet more farms. We are held up by a farmer and his three working dogs herding two dozen Freisland bulls down the tarmac road. His mate is ahead in a pickup, warning on-coming traffic.

We stop briefly to watch a woman deftly using sheep clippers on an Angora rabbit, stretched taut like a naked carcass. We are invited to stroke its velvety body, but warned to keep clear of its head and teeth.

Then the Waitomo Caves: stalactites and stalagmites in a series of murky caverns. Wet steps and relentless drips into still waters. An eerie drift in utter darkness in a boat down the underground river, passing under a milky-way of glow-worms and their pin-pricking lights along the cave ceiling.

And Aukland, at the Quality Hotel beside a rose park, watching news break of the US/British attack on terrorism in Afganistan.

A twelve-hour journey north from Aukland to the Bay of Islands signals the start of a seven-day coach tour.  We pass through more green fields, dotted with sheep and dairy cows. Our driver, as indeed all the kiwi drivers I come across, is well-versed in local matters, and lucidly shares his knowledge. We stop to view a couple of Kauri (giant pine) trees and spend an interesting hour in a Kauri museum. Beautiful rich brown Kauri furniture, kauri gum trinkets – some complete with insects enclosed within the amber -and carvings. A detailed re-enactment of the whole production cycle is produced in a vivid, life-like manner.

Our hotel overlooking the beautiful Bay of Islands surpasses all expectations. The New Zealand birds also cooperate well despite intermittent rain throughout the day.  I spot eight new ones in the brief space of an hour between the hotel and the Treaty House, where Britain and the Maoris made their initial agreement about 150 years ago. 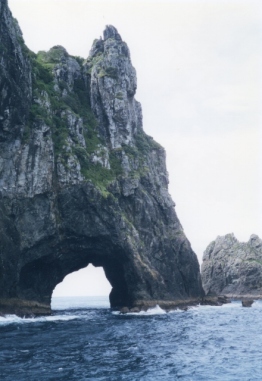 The following day we have a great trip in a catamaran from Waitangi, via Paihia and Russell, around and about several small islands, to Cape Brett and the Hole in the Rock. NZ boasts a muddling mixture of English and Maori names for its places. Dolphins play alongside for a while, and we spy a couple of seals on a rocky islet. Then we cross the swell left over from yesterday’s weather to the end of Cape Brett. Try as he might to make much of the great size of our vessel and the tiny arch of rock over the heaving waves, our crossing is a piece of cake for our captain. 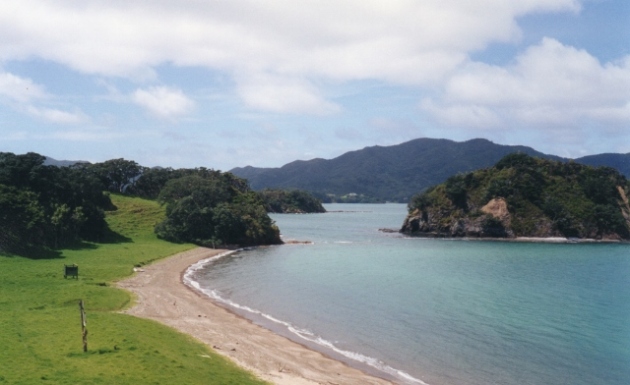 We turn back in brilliant sunshine, passing pieces of interest, and beach on Urupukapuka Island. I buy a bowl of delicious vegetable soup and rather a hard bread roll for my lunch from a busy café on the shore, then, leaving the catamaran to return to base with the crowd, I jump ship and hike out along the trails in this lovely, peaceful place. Little shady coves, inlets, steeply grassed hills. Headland and inland “pa” (ancient Maori hiding places where watchmen would lurk, heavily camouflaged under over-hanging trees). A few sheep, one or two boats idling by, a yacht anchored off a secluded beach with a bikini-clad maiden basking on the deck. More tourist vessels plying the deep blue waters to and fro far beneath. I  pass only two other people during my three-hour hike, and add several more birds to my list, including two pairs of Paradise Shelduck, one with five fluffy ducklings in tow.

I catch the last boat back to Paihia at 4.30 p.m., then walk the three km along the beach and across the bridge from Waitangi to the hotel. I sleep well that night.