Plots, Ideas and a Lot of Fun

Thank you to Richard Hardie for coming by with your astonishing expertise. What? Never been to Africa? You sure have missed out on life. But I’m very grateful for the tips and glimpses of the real you, revealed in our  talk, and I’m off to take a look at the authors den this instant.

Love your website, Richard  – did you build it yourself? And your blog. I can see why you have so much fun. Do you always write books on teenage detectives?

I would love to say I built www.rhardie.com, however the design and all the coding was done by a lovely lady called Tracey using WIX. She also designed the covers for my first two books in the Temporal Detective Agency series and hopefully will design the rest. My blog is a direct link from the website and she also advised on that, although the format is pretty standard. I try to blog every Friday, and usually at 6.30pm, either with an interesting interview, or with a topic that interests me.

As to always writing for teenage kids… I suppose I do. However I was always told that an author should find their “authorial voice” and I have to admit mine is very much of that age group, and so is my sense of humour, which is just as well. The detective side of things came about because when I was planning Book 1 in the series I thought it would be interesting if Nelson’s statue disappeared, the Koh-i-noor and the Mona Lisa were stolen and numerous works of art were discovered hidden away. The solving of those puzzles became a detective story, and the rest is History, or in the case of the Temporal Detective Agency…. became time travel!

I see you were a scout leader for 15 years. To what extent did your experiences then equip you for writing for Young Adults?

My next door neighbour and three mutual friends always went out for a drink after they finished at Scouts, when I used to join them. At that time I wasn’t a leader and until we met up at the pub I used to play snooker with another friend. One night I suggested he join us for a drink and the next thing I knew he had become a Scout Leader and I’d lost my snooker partner. There was nothing else for it but to also join the Scout Association. The six of us remained Scout Leaders  in the same Troop for the next ten years.

Once a year we held parties for all the other leaders (around 120 people) and I wrote short sketches which the 6 of us would act in. We were terrified but it was great fun.

I then started writing and producing the Scout Gang Shows from 2000 to 2012. The second one had the core of the first Temporal Detective Agency book and after many years of writing, rewriting and editing it became Leap of Faith.

Kids and Young Adults have a very sophisticated sense of humour and the biggest mistake any author can make is to patronise them. They are a very discerning audience!

Terry Pratchett helped me write one of the scenes for the stage show and in fact acted the scene out for us to film and show each night at the show on screen. Terry even features in my next book in the series, Trouble with Swords. Though to find out in what way he features, you’ll have to buy the book!

Tell us about your new book “Trouble With Swords.” Do you intend to publish all the other Temporal Detective Agency books as e-books as well as paperbacks?

The second book in the Temporal Detective Agency series has the girls and Marlene travelling much further afield, from Camelot and the 21st century, to Shakespeare’s London, Ancient Rome and Cleopatra’s Egypt. It’s a lot of fun.

Crooked Cat will be releasing the book as both an eBook and simultaneously as a paperback in August. Both formats are incredibly important, but for me to establish a reader base among young adults the paperback is key. People don’t go onto Amazon to browse, they go there to buy a specific book. That means they either know the book, or the author they want to buy before they go on the site, or they’re fans of a specific series. Kids and Young Adults go into bookshops to look for new ideas on what to read so the paperback is an absolute must to enable an author to get established.

A couple of weeks ago in an interview Stephen King said that he believed that the eBook is plateauing and that physical books of all types are making a resurgence. As he so rightly said, there is no greater pleasure that opening a physical book and smelling the paper and print!

Where do you get your plot / story ideas from (apart from your dog)?

The idea for the Temporal Detective Agency initially came about from a Gang Show I wrote, but it needed significant plot and flow changes before it became a readable and saleable book. The idea for Merlin as a woman was purely coincidental. When we auditioned and cast the role for the stage, a Brownie leader was head and shoulders above everyone else, so she got the part and I had to do some rewriting!

I now find that the characters in the Agency series are so well rounded that if I dream up a “what if” scenario, I know how the characters will react and how the story will pan out for the most part.

What is your dog’s name?

My dog, Benji, is a black cocker spaniel with a white shirt front. He’s a beautiful chap with a wonderful temperament and he goes everywhere with me…. Or would do if he could. We used to go to the Gower Peninsular in South Wales for a week twice a year (the family stayed at home). I lived there for many years and of course Leap of Faith is largely based there. It’s the most desolate and beautiful part of the UK and Benji and I used to walk for miles. Unfortunately Benji is 14 now and spends much of his time sleeping, so our Gower days are over.

I understand you find work less fun than writing books for children, but in order that we may have a more complete picture of you – might you tell us what you’ve been doing in “real life”?

For 35 years I worked in the IT industry, both in sales and sales management, latterly selling multi-million pound software to insurance companies initially in the UK, then across the AsiaPac region and then in Europe as well. In my last company I was sales director.

Early on in my career I also sold insurance and German hand carved solid oak kitchens to very rich farmers.

Right now I write, promote books and blog, though I also do occasional work to fill in the gaps!

And what would you like to do / be / have if there were no barriers?

If there were no barriers? I suppose this has to be a wishlist, and that could only be if money was absolutely no object.

I love travelling, and although I’ve been to 47 countries on both business and pleasure there are still two continents I’ve never visited…. Africa and Antartica. I’d love to go to both. 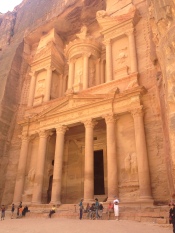 I’d also love to see the Great Wall of China, the Terracotta Warriors, The Valley of the Kings and Karnak, St Petersberg, Washington DC, the Northern Lights and the Earth from the Moon!

I think I’d like to be a best-selling author, but I’m not sure I’d want the pressure of having to produce two books a year without fail.

I’d like to have an Aston Martin DB9. My Facebook profile photo has me standing by one, but unfortunately it was rented for the day.

You attended the Peoples Book Prize ceremonies recently, because your book Leap Of Faith was a finalist. Might you share with us your experience of that evening?

200 books were nominated and Leap of Faith made it to the final 12 in the Children’s category, which was in itself thrilling. The award ceremony dinner was a black tie event in an old Guild Hall in London and was sumptuous. The food was excellent and the whole ambience was an experience to savour.

You go to a lot of trouble to help fellow authors in the tricky task of marketing, and I’m a grateful recipient. Have you any other gems to share with first time authors – maybe on the subject of e-book marketing?

Having been a salesman for many years and having dealt with the CEO’s of some of our largest companies, talking to people and drawing up marketing strategies has never been a problem for me. I thoroughly enjoy approaching and talking to independent bookshop owners, either about stocking my books, or about arranging a signing day. Signing days themselves can be even greater fun if you start by knowing that sitting there with nobody in the shop can be a lonely job!

Marketing eBooks is a different kettle of fish. As I said earlier, people don’t go to Amazon to browse, they know what they’re going to buy beforehand. There are sites that DO enable and encourage readers to browse and then provide a link to Amazon, or your own website. I find the best of these is Authorsden.com. It allows the author to post details about their biography and about each of their books. It provides the reader with rankings, in total and by genre, not of Amazon sales, but of the interest expressed by other readers. It’s very well presented and also gives the author excellent statistics about how many people viewed each of their pages and then further statistics on who and how many people actually followed the links to Amazon, your publisher, or your own website.

As far as ordinary marketing is concerned, it’s important that any author keeps a high profile. That means shop signings, newspaper articles and features, library presence, talks, school visits (in my case), reviews (not just on Amazon) and some social media presence. Authors can’t be reclusive. It’s like selling soap powder…. The advertisers have to keep telling us that Fairy is the top brand, or within a very short period of time it won’t be!

And finally – honestly – how many hours a day on average do you spend socially networking?

Generally my day starts with checking and replying to emails, then going onto Facebook to deal with direct messages and the odd conversation. Twitter I do very little with now. I have to admit that I do keep Facebook on most of the time, whether I’m actively on it or not, but I try to limit myself to an hour a day at the most.