Ever had Books Trying to Climb out of You?

Glenn Muller, a man of many facets, is the second Canadian in two weeks to grace my blog. His occupations, from  hotel administration and computer applications to bookkeeping, included twelve years as a driving instructor, which fuelled his first novel, Torque. He says it took him more than twelve years to complete the novel, but it is still only a quarter of the time I spent on Breath of Africa! 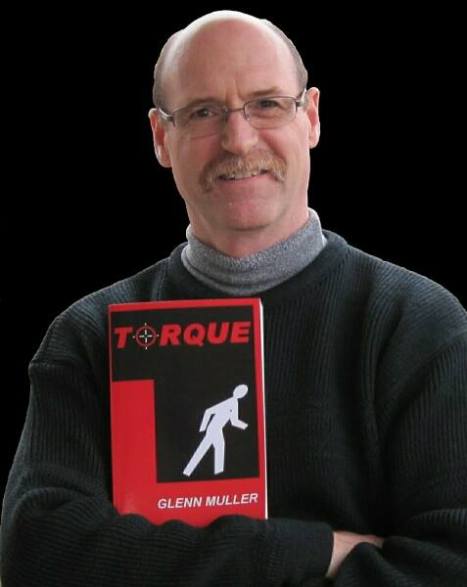 Quote: “The alarm didn’t quite wake the dead, but as Fenn would recall it sure as hell roused the living.”

Glenn, when did you start writing, and what made you progress to writing a thriller?

I’ve guess I’ve been writing since I learned how to sharpen a pencil. Over the years I’ve put my hand to poetry, short stories, articles, and presentations. Penning a novel had been in the back of my mind for a long time before I decided to commit to such a big project, and the book turned out be a thriller for two reasons; I read a lot of that genre, and the style generally requires plenty of action, ergo less chance of boring the reader.

You say your new novel, Torque, was inspired by the years you spent as a driving instructor – would you care to elaborate, and how long did it take you to write?

Once I had decided to write the story, I had plenty of time to put scenes together while driving from one student to the next. I would imagine situations based on my immediate surroundings and the people (generally speaking) that I encountered. As to how long it took to write – well, I don’t know if it’s funny or sad but it actually took me more years to complete the book than I actually spent in that job.

Reviewers have commented on the humour in the book. How much of a comedy is it?

While Torque is first and foremost a thriller it does have plenty of funny bits. Chas Fenn, the protagonist, is a driving instructor and, speaking from experience, a healthy sense of humour in that occupation is definitely an asset. I naturally see the quirky side of most situations, and am more than happy to let that bleed into the writing. In Torque, the comedy usually comes as relief to a dark scene, often in the form of witty dialogue or an ironic turn of events.

I’ve glanced at the first couple of chapters of Torque. It looks a like racy, well-written read. Are you planning any more cases for Chas Fenn to solve?

The short answer is, probably. The long answer is that the book currently trying climb out of me doesn’t have any of the characters from Torque. It will be similar in style but I have to go where the inspiration takes me. Having said that, I’m sure that sooner or later Fenn will get himself mixed up in something else.

When and why did you decide to self-publish?

Once I felt that Torque was as polished as it was going to get, and I had some help getting to that point, I started to query agents and publishers. After six months of that, with only a couple of nibbles and a few polite rejections to show for it, I decided that life was too short to wait for the traditional gatekeepers to allow me to get in the game.

I’m technically savvy and there is a lot of information on how to self-publish, not to mention the many companies that are happy to assist. Confident that I had a good product, the decision was easy. Publish and get the book out there!

Tell us about your journey into marketing your book – what works, and what doesn’t work.

Anything an author does to promote their books works to a certain degree. You never really know when, or where, you might catch someone’s interest. I have had the best success when I’ve actually met prospective readers in person, although blog posts, like this one, can cover a lot more ground.

Since many writers don’t have the budget to pay for advertising then reviews in the media are golden. But in the end, it boils down to the readers passing the word along. Once that happens the work becomes more self-sufficient and the writer can focus more time on the next project.

You say you write a specialized sports column for a local newspaper. Care to share your interest with us?

Ha! I wondered if someone would ask that one. I have played soccer, hockey, baseball, football, you name it, but several years ago I became fascinated with lawnbowling. That’s right, folks, the game Sir Francis Drake played right before he whupped the Spanish Armada. I felt the game was misunderstood, particularly in North America, so I started a column in the local rag, where each week I would uncover the history, the mystery, and the myths of the sport. It was quite popular and built up a faithful readership.

What do you do in your spare time? 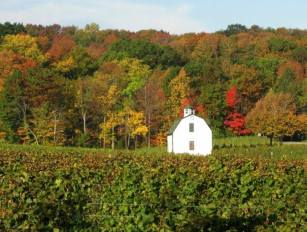 Since I work a full week as a bookkeeper, writing takes up much of my spare time but in the Winter I like to cross-country ski (when we get enough snow) and in Summer I lawnbowl or cycle; we live in the Niagara wine country so it’s very scenic.

Also my wife and I will hitch up our travel trailer and go camping. Here is a picture I took along one of my favourite cycling routes.

Where have you been on holiday? Tell us about your favourite places

We are also amateur astronomers, so we try to find places where the skies are dark and the stars are bright.

Since we bought the trailer we have travelled up to the top of Lake Superior and down to Savannah, Georgia, and many places in between. Here is a picture of the wonderful beach at Huntington Beach State Park, near Myrtle Beach, South Carolina.

What is your most satisfying achievement so far?

In terms of things that most people don’t accomplish I would have to say that writing and publishing my first novel ranks at the top. Although I have been writing for decades, completing a full-length novel is a new plateau. Knowing that other people also enjoy it is icing on the cake.

Well, thanks for inviting me to your blog, Jane. This has been a pleasure. For your blog followers who would like to read Torque, it is available in paperback and e-book at many of the major online outlets – here are links to the most popular:

1 Response to Ever had Books Trying to Climb out of You?