I asked my daughter to paint a sample cover for BREATH OF AFRICA using the theme of a false baobab.

The plains of Africa are littered with ant hills. Some envelope the trunks of scraggly acacia bushes, turning them into grotesque images of stunted baobabs, that disintegrate when the ants move on.

The excerpt below gives a taste of the context. 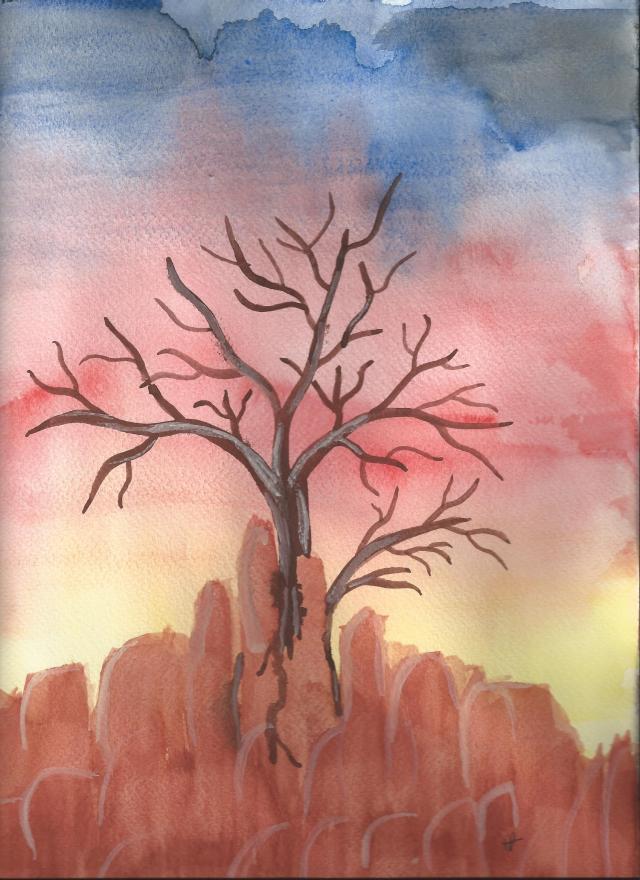 Mwangi settled into the wet patch made by his shirt on the back of the car seat. A salty bead of sweat trickled down his cheek and he caught it with his tongue.

A faint track wound away from the soda lake several miles south of Magadi where large cracks appeared in the sun-baked sand. On the right, a hump of red earth spread from the roots of a twisted thorn tree, dotted by fresh holes and tiny turrets pushed upwards by busy termites. A shadow flitted between the bushes and a cowbell tinkled. It could have been a birdcall. Mwangi glanced over at his passengers, but they hadn’t heard it. Their faces were pressed against the windows, peering eyes seeking the false baobab.

He felt a tap on his shoulder.

The rains had not yet broken, but a thunderstorm lurked ominously to the south. Mwangi stayed in the car while his passengers got out to stretch their legs. He watched them clamber up a nearby sand dune.

Sam was tall and nomadic-looking, but not dark enough to be a true tribesman. It was an insult that such things should happen. The other, Paul, with his fair sun-blotched skin, would be a bonus. But his mind focussed on Caroline.

Mwangi slid a plastic folder from his inside jacket pocket and studied the photograph within. He smiled. The spirits had been kind to him. He would enjoy frightening her with this. She was at his mercy. And the others he would dispose of soon enough: in his own time.

Then he would be able to live in peace.

If you want to learn more about my forthcoming book, check out this post: The Next Big Thing.

This entry was posted in Breath of Africa and tagged Africa, Kenya, Nairobi. Bookmark the permalink.

2 Responses to The False Baobab.