After our canal boat ride I was worried about being on time for the wine-tasting meeting at Porte Narbonnaise an hour later. Prepared to take a taxi, I offered to pay for the others. But they were reluctant and I needed the exercise. Trusting again to Carrie-Ann, we marched the route to la Cite. They kept to my slow speed. It was a long way on hard pavements and rough paths; the sun beat down and streams of sweat threaded my hair under my Aussie bush hat. But we arrived on time. I rested on the side of a trough where pigeons sipped, while the others stood waiting for our host.

We followed him up through a cobbled street bordered by colourful vendors, rubbing shoulders with tourists from all directions. We crossed to the other side of the city and examined the circling golden artwork, consisting of tinfoil topped with bright gold paper, stuck to the stonework in clever concentric circles. Thank goodness it wasn’t paint. Laurence told us the controversial spectacle, commemorating the anniversary of the city’s recognition as a UNESCO listed site, would be removed in October. 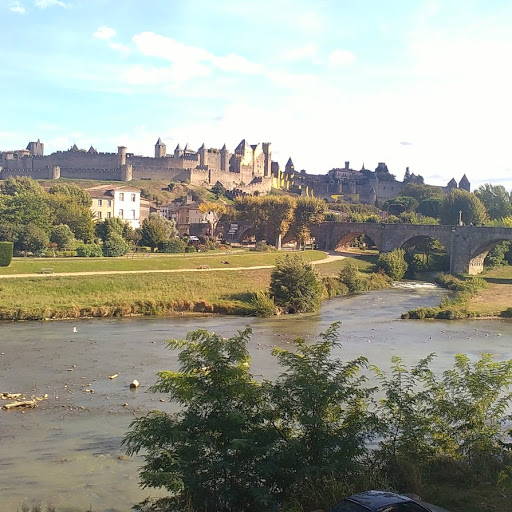 Then I realised – that glimpse from the canal of the sun striking the towers was none other than the brilliance of the design on its walls.

As dusk fell we gathered in a private circular crenellation on the castle ramparts, sipping at many variations of wine and nibbling titbits; getting to know each other and appreciate our similarities and differences. The conversation grew less erudite as the wine took hold. There was no spittoon. I furtively tipped some unfinished samples onto the concrete below before accepting another, but I didn’t see anyone else do the same. How did they manage all this alcohol? I preferred the throaty red at the end and drained my glass. The wind gusted through the arrow niches; it was getting cold.

We hobbled over the cobbles back into the city centre. Our party of seventeen were turned down at our inn of choice. Why don’t we just take three tables, I thought. However, after some hassling, we were accepted at another. My delicious smoked salmon tagliatelle was just the dish to warm my insides and soak up the effects of the wine. An evening of warm camaraderie and one or two asides of semi-serious author talk in anticipation of tomorrow.

A painless thirty minute walk down the hill in the cool of the night, following Carrie-Ann’s lighted mobile until the battery died. But she’d memorised the way.

Our landlady had removed the smoke alarm battery during our absence, and left us some chocolate and soap bars in compensation.

A blessed peaceful night, before an early rise to meet at the Hotel de la Cite for 9am.

This entry was posted in Travels and tagged Carcassonne, medieval city, UNESCO listed status, wine tasting. Bookmark the permalink.
%d bloggers like this: