Minor Problems and a Canal Trip

It is still our first day. We had a quick shower and change in our well appointed Casa del Teisseire and the fifteen-minute walk back to the station, downhill and without luggage was a doddle. We sauntered along the Canal du Midi guided by Carrie-Ann’s google maps and found our publishers’ abode, no problem.

The other authors were already there, and for the next three hours we sat in the pleasantly shaded patio imbibing wine, chatting and partaking of endless platters of delicious meats and salads. A veritable feast – made even more welcome as I’d eaten little since arriving in Toulouse early that morning.

We walked back with Miriam to her hotel Bistro opposite the station and went home without having to rely on the mobile directions at all. We were already feeling at home.

A shrill peeping noise woke me. And another a while later… it wasn’t until dawn and a conversation between us that I realised it was the battery fading on the smoke alarm. The ceiling was very high and there was no way we could reach to take out the battery. The peeping continued, and I messaged airbnb before we went out for a canal boat trip up the Midi. The 12.30pm ride advertised did not materialise, so after buying ourselves sandwich breakfasts, Miriam came back with us to the Casa.

There was a message on the table from Marion – she’d heard no peeps. Perhaps we’d removed the battery? We must have just missed her!

The sharp peeps continued to interrupt our thoughts as we passed the time, pouring over maps and making plans. I messaged Marion again, saying we were going out soon, and wouldn’t be back ‘til late at night, and the peeps were still sounding. Could she please renew the battery!

We walked back to the Midi and boarded the boat for an afternoon ride; a pleasant, peaceful ninety minutes through foaming locks.

Leaving the suburbs of Carcassonne behind us, the boat slipped quietly between borders of green foliage and tall trees.

We turned back and stopped for a romantic sighting of the Citadel with the sun striking its ancient towers. (You’ll see a better picture of it next week.) 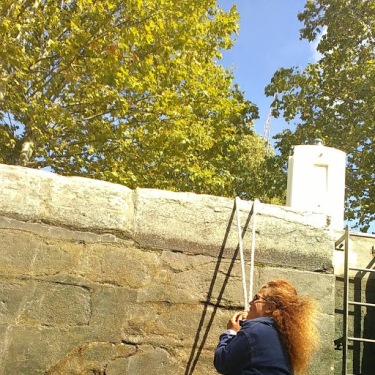 Our guide, a lively buxom wench with an unruly mass of bright orange corkscrew hair, regaled us with snippets of information in French, English and, privately to a couple behind us, in Spanish. At one lock a man in dirty jeans appeared on the shore. He had short-cropped hair and a fuzzy chin. Lying in provocative manner along the wall, he assisted with the ropes. On tiptoe, she reached up to him. The water rose and the lock filled. They waited; closer and closer…

“Are they going to kiss?”

Just as the gap between them narrowed to a mere couple of inches, he got up, handed back the rope, and sauntered away.

4 Responses to Minor Problems and a Canal Trip