I hope you enjoy this lovely chat with Alice Castle, who shares with us her love of her home town, and how she came to commit to her crimes… over to you, Alice.

I was walking through Dulwich Village one day two years ago, passing the white picket fences, bustling cafes and stunning Georgian houses, when it suddenly struck me that this was the perfect spot for a murder.

Before you call the police, this isn’t a confession to a crime – it’s a declaration of intent to commit a whole series of them. But don’t worry, I’m a writer, not a killer. While I hope you’ll be on the edge of your seat, you’ll definitely live to tell the tale.

In Dulwich, you have the closed circle of suspects, the affluent lifestyle and the beautiful surroundings that made Agatha Christie’s St Mary Mead such a promising hotbed of turbulent emotions. A murder in an apparently tranquil setting is a seismic shock, a blow against the natural order of things that cries out to be solved by a gifted amateur sleuth. The twist is that SE21 is also firmly part of contemporary London, and not far from the meaner streets of Catford and Peckham. So as well as the sort of motives Miss Marple would recognise, I’ve introduced modern themes like incest, anorexia, cyberbullying and white collar fraud.

Once I’d had the idea of updating Golden Age crime for a new audience, writing Death in Dulwich and its sequel, The Girl in the Gallery, has been pure pleasure. The books reflect my love for the area, thanks to years living in Dulwich, with my children at the schools which play such a large part in the stories. They’re stuffed with characters that I hope fellow Dulwich devotees will recognise affectionately, and either wish they could share a cappuccino with in Gail’s, or would swerve to avoid outside Tomlinson’s.

My single mum detective, Beth Haldane, is the sort of person you might well see at the gates of a school like, say, the Dulwich Hamlet. But, though at first sight Beth seems a typical Dulwich yummy mummy, it’s not just her precarious financial situation that keeps her aloof from the pack. Her love of puzzles, insatiable curiosity and a fair dash of reckless bravery lead her into situations from which I would certainly hang back. Luckily, she has Metropolitan Police Detective Inspector Harry York dogging her footsteps, keeping her safe and failing to act on the developing spark between them.

My first book, Death in Dulwich, centres on Beth’s new job as archivist at Wyatt’s, the most prestigious of the Endowment Schools set up by the swashbuckling Sir Thomas Wyatt in the seventeenth century and still going from strength to glossy strength today.

The second instalment, The Girl in the Gallery, is inspired by the extraordinary Dulwich Picture Gallery, one of my favourite places in the world. As well as the wonderful art collection, I’ve always found the building itself fascinating. It was Sir John Soane’s favourite creation, and it doesn’t take much to see why. The mausoleum at the centre of the Gallery has always exerted a morbid fascination for me, seeming to cry out for a starring role in a whodunit, and I’ve been happy to oblige.

My third mystery, Calamity in Camberwell, coming out on 13th August this year, features Beth battling against the world again. One of her friends has disappeared. Why does no one else take her absence seriously? It’s down to Beth to sort the situation out. If you want a job done, ask a single mother with a million things on her plate. And Dulwich, as ever, remains at the heart of the book. For her fourth outing, Homicide in Herne Hill (coming out this autumn) Beth will be venturing down Half Moon Lane, but she’ll be slipping back to the village to sneak a coffee with her best friend, yoga teacher Katie, as often as humanly possible.

It’s been a joy to plot these books and to weave in the local landmarks which I know and love so well. I hope Dulwich residents will forgive the mounting body count, kick off their shoes, get snuggly on their sofas and have fun too, reading about the sort of things that couldn’t possibly happen in Dulwich, darling. 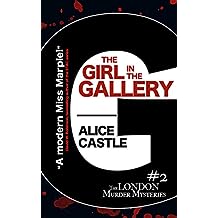 You can buy Death in Dulwich and The Girl in the Gallery from Village Books, Dulwich Books, Herne Hill Books, Clapham Books and Amazon, via www.MyBook.to/1DeathinDulwich and www.MyBook.to/GirlintheGallery.

And please go and say hello, via Alice’s site www.alicecastleauthor.com,

5 Responses to That Couldn’t Possibly Happen in Dulwich, Darling…