What a delight to welcome Sarah Stevenson today, who treats us to something entirely different by way of settings. And I can guarantee you’ll enjoy her unique book.

Thank you so much for hosting me, Jane. And what a fascinating, thought provoking subject.

I am a new writer and Dougal’s Diary, my first book, was published in January. Because it’s a 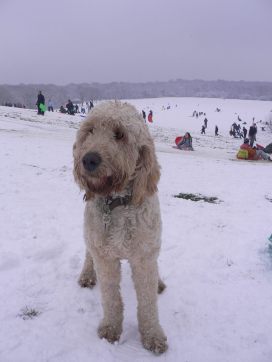 fictional diary written by a dog, I didn’t have to worry too much about vital things such as settings, hooks at the end of chapters and the five senses. Of course dogs do have a highly developed sense of smell, but are more interested in the aroma of sausages than the scent of a rose. Beautiful sunsets are unlikely to be noticed and architecture seen as a post to pee against, as opposed to a work of art.

A real version of Dougal does exist, so when it came to settings it made sense to base the story where I live in South East London; walks in Greenwich Park, trips to the vet and tow path runs along the Thames. In a way, the setting chose itself.

Right now I am facing many new challenges. Since I didn’t want to write another dog book, I decided to try my hand at cosy crime. And here I met all the pitfalls I’d avoided with Dougal’s Diary; structure, pace and settings. 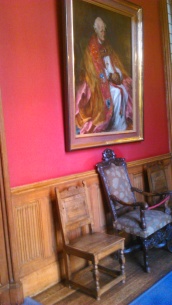 I thought I’d use my own experiences as a free-lance chef and send Tilly Carey to a stately home to cook for a funeral. It’s her first job out of catering college. Deaths occur. If it’s poison, is she to blame? For the settings in Recipe for Murder, I decided on large rambling houses in Gloucestershire, Malta and Bristol.

I grew up in Bristol, in the top flat of a mansion. The architect who designed the Paragon built the last house for himself; forty rooms including anti-room and ballroom. There was a lift for coal and rubbish. A caretaker’s flat in the basement and in the vaults below, a huge wine cellar, without any bottles. Outside there were terraces, balconies, a garden with a tennis court, fig trees, vines and greenhouses. I guess I’m familiar with large, crumbling dwellings.

I’ve worked in several country houses close to Highgrove House in Gloucestershire and given BBQ’s for the three Princes after polo matches. But how much of the area did I actually take in? Most of my time was spent in kitchens; the only outings ones to re-stock shelves and fridges. I realised I knew more about Waitrose in Cirencester than I did about the surrounding villages. And I had to be careful not to describe the dining rooms of Lambeth and Kensington Palace or the fourteenth century house with great hall, minstrels’ gallery and one toilet, where Princess Margaret loved to visit. Never give any secrets away.

I needed to find the right year for the setting in Recipe for Murder, and picked October 2008.The banking crisis. The collapse of the housing market and terrible weather, forcing road closures in the West Country. Food deliveries affected. The shops empty of provisions. It was also the year Malta adopted the euro. And a time when their cheap hotels were so sub-standard, cockroaches enjoyed a daily parade across many dining room floors.

Just to give myself a bigger headache, I gave the main character, Tilly, an assistant from Tbilisi. Konstantine is a student, studying in London.

Why, I ask myself, did I not set it in some fictional place, in no particular year where all facts about weather, TV programmes and political scandals could be entirely made up?

Whenever I go away next, I shall take down every minute detail about the location, just in case I want to put it in a novel. Meanwhile, I shall drive west, taking in Bath, Bristol and Tetbury. But should I re-visit Malta? And what about Tbilisi?

Dougal’s Diary, published by Crooked Cat, can be found on amazon: http://www.amazon.co.uk/Dougals-Diary-Its-Dogs-Life-ebook/dp/B019BCEVMA/

Has he chosen his owner well and landed on his paws? Dougal the Labradoodle puppy, a complete hypochondriac and Boris Johnson’s No 1 fan, arrives in Greenwich with great expectations.

He longs to travel the world on Virgin Atlantic, dine at royal banquets and either become a superstar and party the night away or work as a doorman at the Savoy.

Behaviour classes were never on his wish-list, neither were cliff-hanging experiences on the Thames, booze cruises to Calais or obsessions for eating socks.

Can he survive life with a chaotic owner and her eccentric friends? Can he deal with his jealousy when a foster puppy comes to stay? And as for his dreams, will they ever come true?