Our Final Day in the Galapagos Islands 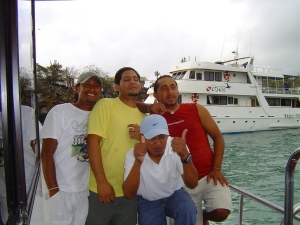 Another early breakfast, followed by farewell photographs and presents for the crew. Billie ushered us into the dinghy for the last time, and we headed for the Charles Darwin Centre in a vain attempt to beat the crowds. But it was not to be.

Nevertheless, most of us managed to get some comparatively people-free pictures of the enormous tortoises which are protected and bred here. The plan is to re-distribute them to their natural habitats on the islands, where they are now conspicuous by their absence. The babies in one enclosure were covering the concrete like hundreds of giant bedbugs, and there is every hope that this effort to save the endangered species will be successful.

Very soon it became unbearably hot, and we paused for ice creams in the mediocre shade before reclaiming our luggage at the harbour and boarding a bus for the island crossing, followed by the ferry and the flight back to Guayaquil. Billie obtained the prized Galapagos stamp in our passports for those who asked, then disappeared after a brief farewell, to meet his next group.

They insist on using local guides in the Galapagos, which is understandable in order to support the local people. However, I cannot help feeling the authorities would be better advised to provide their guides with more intensive training, if their precious heritage is to retain its value in the eyes of the rest of the world. The Galapagos Islands are a wonderful experience for anybody going there for the first time, and their special aura at present overshadows any shortcomings. However, despite strict rules on where and when tourists are allowed to go, the environment could be in danger of being sacrificed to sheer numbers, and to laxity in enforcing the regulations. Although Billie did his very best, I would have been happier had we not had to share our wilderness within sight of dozens of other visitors.

But perhaps I’m too fussy, for there are few places in the world where one can really “get away from it all”.

2 Responses to Our Final Day in the Galapagos Islands