I went walking in London last week. Normally, I avoid long walks on pavements like the plague, for they play havoc with my back. But London fascinates me and I don’t feel the pain until after I’ve stiffened up on the train journey back home.

The “Marmalade Walk” is named after Paddington Bear who loves marmalade. Michael Bond, his creator, still lives near Paddington Station, which has the only shop in the world dedicated to the famous bear. 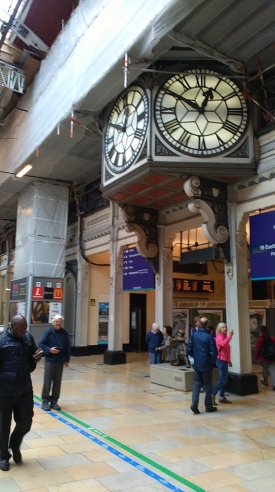 We loiter in Paddington Station with its iconic Clock Arch, and I cannot resist recording these 1916 hydraulic buffers at the end of platforms 11 and 12.

Our walk round the City of Westminster is full of contrasts, and I am able to experiment with my new i-phone camera. Modern technology makes everything so easy, once you’ve mastered the sensitive touchpad. I have to delete many accidental exposures and a few inadvertent video-clips.

Little Venice is a surprise. The canal  waters are covered by a bright green algae of sorts,
with plastic bags and even empty coke tins lying on top. Not a pretty picture. Despite the cold cloudy weather, a meagre straggling queue waits for a boat trip. But we pass by and make for the canal walk, crossing a bridge. I look back, and surprise a glimpse of sunlight. A passing boat has created a wake of clear water, and it is really rather pretty.

We return via the Rembrant Gardens, upgraded in 1975 to commemorate the 700th anniversary of the creation of the city of Amsterdam. But it is not yet the season for tulips and hyacinths, and we gaze over the railings at a neat expanse of lawn.

A short detour takes us past St. David’s Welsh Church, now a French Bilingual school. Its claim to fame is that it replaced central London’s last thatched house in 1889. I look around in vain for a picture of the thatched house. 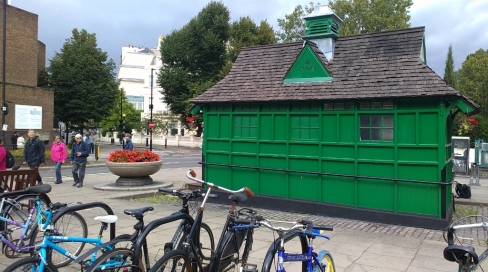 Cabmen shelters exist in London as Grade II listed buildings. A charity was set up in 1874 to provide a place for cabmen to get “good and wholesome refreshments at moderate prices” to keep them out of pubs. I enjoy the mix of old and new, provided by the bicycles in the foreground.

We pass through a quiet, rich neighbourhood, punctuated by sleeping policemen, before arriving at Paddington Basin. 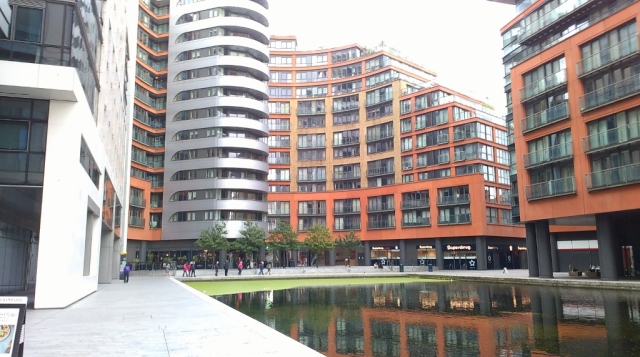 I don’t usually appreciate modern office buildings and apartments, but the weak afternoon sun has caught the colours, reflected in the still waters. We stop for tea in an empty cafe, so sleepy it takes an age and three reminders before we can enjoy our cakes. But we are in no hurry.

Did you know that The Lindo Wing of St. Mary’s Hospital was opened in 1937 before the establishment of the NHS as a “paybed” or private patients’ wing for “patients of moderate means.” It is an unprepossessing sight viewed from the street, but Prince William and Prince Harry were both born there, and so were their Royal Highnesses, Prince William and Prince George. We pause on the drab pavement opposite the entrance, remembering the TV pictures not so long ago, of  William and Kate posing for the photographers with their baby. 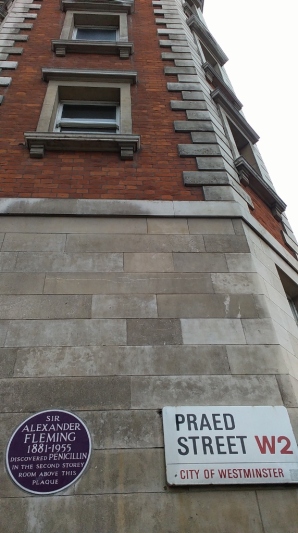 This blue plaque on the corner of Praed Street marks the place where Sir Alexander Fleming discovered penicillin in 1928. I manage to record the vital second floor window of that very room.

And then we amble through the thin Saturday evening crowds to catch the bus back from Hyde Park to Victoria Station. I think the bunting must be celebrating the fact that our Queen has now reigned longer than any other monarch in British history.

Hope you’ve enjoyed this little diversion from the Galapagos Islands. I’m back with the birds next week!

1 Response to Bunting at Victoria Station