The road from Jerusalem to Jericho, oldest city in the world, is smoothly tarred. We stop at sea level to take photos, and Zinniah our guide gets muddled between degrees of latitude and degrees of heat. Then we dip into Jericho, drawing to a halt near an ancient “sycamore” tree.

‘Why are we getting out here?’

I remember that she told us half an hour ago about Zaccariah the tax collector climbing a sycamore tree to see Jesus.

Eventually the penny drops. But my bible says his name is Zacchaeus, and Susan whispers ‘That isn’t a sycamore tree…’

The bus takes us on to a parking spot in a dusty area. We are to get out again, Zinniah says.

‘There’s a shop over there,’ she waves vaguely to some buildings on the left, but scampers towards a rough pathway up an opposite slope into the blazing sun. We emerge from the bus and dither between the two choices. A couple detach themselves and wander towards the unprepossessing shops. I follow the majority up the slippery path.

Zinniah points out a distant escarpment, where she says Jesus was tempted in the wilderness, then she races downwards through mounds of sand towards some vague excavations. The heat beats down and my nose begins to burn under the brim of my hat.

I round on our tour leader, who soothingly offers to go back to the bus for my sun bloc, binoculars and scarf.

But she wouldn’t know where to look. She accompanies me to the bus, and by the time we return, everyone has wandered back from the ruins and they head off for a drink at the shops. I plonk myself on a bench under some meagre shade, while another group is introduced to the site. I listen in and study the temptation mountain through my binoculars. In the stifling heat, and burning with indignation, I do not feel like straggling through the site on my own.

The bus is choc-a-bloc, the luggage taking up the whole of the back seat. We have to sit with our backpacks on our laps or in the aisle. My single seat is too small for me, and there is no arm rest, nor does the safety belt work.

Our leader is angry, and telephones the tour office from time to time, asking in vain for a bigger bus. Zinniah has to stand at the front. Her spiel is as muddled and incoherent as ever. At least our leader now tries to keep us informed of what’s ahead, although she’s not been here before.

The Dead Sea looks deliciously refreshing. With a host of other tourists, I plod down to the beach wearing my sandals – the ground is so hot – and step onto the wooden pier. Bodies bob atop the wrinkled waters and I dip my toe into the tepid liquid. I try to immerse myself, but I keep on popping up. Giggling, I catch someone’s eye. 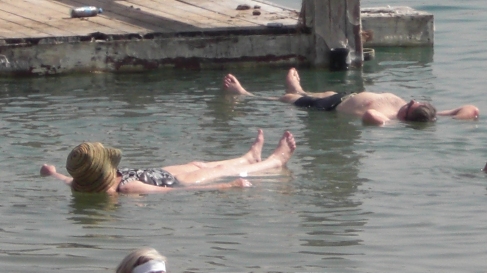 ‘You have to just lie there, and keep still,’ she tells me.

I try again. Just lie there…. While the top half of my body bakes.

I want to turn over.

It is hilarious trying to manoeuvre in the buoyant water, but after several attempts, I learn; then keep still. It’s more entertaining on my back with head cocked to watch other unwary souls approach the water’s edge.

I hear a shout and a loud plop from near the beach. A group of travellers coated with mud, are pelting each other with the heavy stuff.

Clumsily I make my way through the resisting water and stretch into the gluey substance, grimacing as it oils its way through intimate folds of skin. I keep clear of the frolicking youths, then clamber onto the shore and retrieve my sandals, going with other souls covered with grey slime, for a fresh water shower followed by a delicious drink of pomegranate juice.

4 Responses to Things Going Wrong and a Glorious Mud Bath