Little More Than a Large Lake

In Galilee, the pure peace and holiness of the Sea and its surroundings permeates the soul. 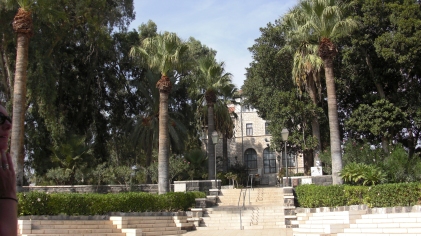 We climb the Mount of the Beatitudes to the Monastery. Stones inscribed with each Beatitude line the walkway between green lawns and gardens overlooking the Sea of Galilee. It is little more than a large lake. We enter a dim, hushed chapel, and a presiding nun holds a finger to her lips, reminding us of the seal of silence.

Nearby, the Church of the Multiplication of the Loaves is of plain modern design, full of light and entirely different.

A short bus ride takes us to Capernaum (“place of people”) where we admire the simple architecture of its hexagonal church, built above the traditional site of Peter’s home where Jesus started his ministry. We peer through the glass floor at the tiny, rough-hewn stone chamber, scarce providing room for two grown men to sleep. Some excavations nearby invite exploration, including the remains of an ancient temple. A striking statue of St.Peter, “The Rock” dominates the garden.

Then we head for the Sea of Galilee and our scheduled 45 minute boat ride.

I’ll let this quote from “I Lift Up My Eyes” speak for itself.

“Eagerly, Ann waited in the queue to board the boat for their forty-five minute ride on the Sea of Galilee. It came to berth, blaring loud music as the previous group disembarked, chattering and laughing. Her enthusiastic bubble shattered in disappointment.

The captain greeted them as they took their seats round the padded sides of the motor boat.

“You want music?” he asked. “I have all kinds – spiritual, classical, jazz…”

Ann exchanged glances with her friends, and they politely declined.

The captain showed his disappointment.

“You want to stop in the middle of the lake?” he asked. “We turn off the music for time of silence and prayers.”

Ann preferred to pray silently. She had deliberately chosen not to join a religious pilgrimage for that reason, and was relieved to see that the others concurred.

The boat creaked away from the shore. Weak rays of sunlight penetrated the haze, and then burst through to bathe the waters with brightness as they neared the centre of the lake. Looking out over the water, Ann felt closer to the biblical ambience than in the bustle of commercial Christianity with its outward shows of sanctity. She could see the places where Jesus had been. There was the Mount of the Beatitudes, and the tiny village of Capernaum to the north. But the view to the Golan Heights in the east was hazy. She pictured in her mind’s eye the biblical herd of pigs possessed by a legion of demons, rushing down the hillside and drowning in the lake.

The captain cut the engine. Wavelets lapped softly against the side. Not a single bird call disturbed the silence. Ann’s body rocked with the gentle motion of the boat as she gazed into the distance.

God, where are you? Please show me your presence.

He was there, she knew. This was his place – the land where Jesus lived and taught his disciples to go out into the world and spread his word. She knew he was there, but within herself she felt nothing. Quietness, yes, even peace. But no thrills of ecstasy, no striking spear of enlightenment. Her head nodded to her chest, and her eyes closed in humble supplication.”

This entry was posted in I Lift Up My Eyes, Travels and tagged Capernaum, Golan Heights, Mount of the Beatitudes, Sea of Galilee, St. Peter. Bookmark the permalink.

1 Response to Little More Than a Large Lake