Half-way Round The World – And Thirteen Years On, I’m still Talking About It

Before reading on about Fraser Island and its dingoes, here’s a link to my interview with Allison Fear on BBC SUSSEX RADIO yesterday. My bit starts at 2.43.42 pm and ends at 2.58 pm, and there’s a nice bit of Adam Faith music in the middle. It is only available until 31st August, so you’ll have to look lively!

And now, back to my Walkabout…

It is October, 2001.  I arrive in Brisbane early in the morning, having put the clock back three hours. Hillel Rifkin is the same as ever, even though we haven’t seen each other for 35 years. His wife Lena is a delight. They live in a tiny one-bedroomed Housing Commission Unit on Woody Point, a northern suburb of Brisbane, and had borrowed a bed for me, lined up against their sitting-room wall. 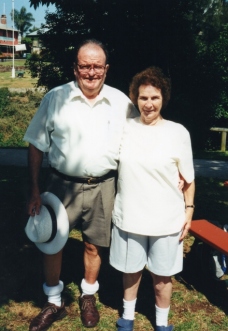 My five day stay with them is one of the most pleasant of my travels. They are very near the beach and after New Zealand the hot, dry weather is a treat.

They take me to indoor bowls that afternoon – five mats in a village hall, with 40 “oldies” having a great time. Some of them are really good. Hillel and Lena both boast trophies on their mantelpiece. It is very different from outside greens, where I have previously gained my “experience” in our annual varsity matches at Muthaiga Country Club in Nairobi. It takes me a while to adjust and I am tired, but everybody is very patient and friendly.

The following day Hillel and I go for a two-hour walk and talk along Sutton’s beach in the sun, catching up on old times. Afternoon tea is with octogenarian friends in their home nearby – local bowls stalwarts, and pillars of the Presbyterian church. A lovely couple: he proud of his garden and reminiscing about former dancing days; she proud of her cooking, and the current local bowls champion.

On the Saturday I go to “Fraser Island In-a-Day”, eight hours on a double-decker coach and six hours on Fraser Island, home of the dingoes, who had recently attacked two children. We pass long stretches of gums and large farms along the way; horses, some cattle, bare fields. There is an abundance of birds. The wide two-lane highways takes us past a mass of cars and people at a market. I gaze out at “glass mountains” covered with trees.

Australia is another big, big country, more casual and less spotless than the United States. The coach driver is not as interesting or talkative as those in New Zealand.

We arrive at Rainbow beach after a roadside lunch near a pond where I add seven birds to my list and then we decamp into two 4WD buses and catch the ferry to Fraser Island.

The buses race each other across the beach for an hour along the firm sand at the edge of the foaming breakers as the tide comes in.

We go inland to walk in the rain forest at Central Station. A crystal clear stream tinkles below the path, and I spy an eel wriggling upstream. We drive along deeply rutted tracks to an inland lake; pure soft water on silicon sands. I wander away from the others to savour the stillness.

Back down to the beach, the tide is out and many tracks cut deep furrows in the soft brown sands as the Aussies drive crazily up and down, spinning their wheels and revving their engines. I tremble at the hazard to beach walkers, crabs, shells and snails.

After supper, the journey back to Brisbane is long and tedious – sleeping uncomfortably on the airline seats.

2 Responses to Half-way Round The World – And Thirteen Years On, I’m still Talking About It