An Island of Contrasts

I rub my eyes after a four o’clock wake-up call in Honolulu for a 5.15 a.m. pick-up… but I don’t arrive on the island of Maui until three hours later, thanks to security requirements. Six of us rattle around in a large bus for the tour, plus our guide Peter who talks non-stop. He is one of thirteen children, and has four of his own. A true Hawaiian, he was born in Maui, he tells us, and has a Masters in Business.

We drive along a flat valley floor through sugar cane and pineapple plantations, then wind up a tortuous ten thousand feet to the summit of the bleak and dormant volcano Haleakala. At one stage on the ascent we pass a field of bumpy spiny grass; I remember seeing similar large tufts on the moorlands of Mt. Kenya and Peter explains it was indeed brought from Kenya in the mistaken belief that it was good for cattle. They also imported mongooses to control their rodent population before they realised they should have chosen snakes instead.

We come across several cyclists grouping on bends in the road, before releasing their brakes and riding helter-skelter down the steep gradient in a thrilling race with the clouds to the bottom. We learn that the only time the volcano top is clear, is in the early mornings, and often not even then.  So we are lucky. 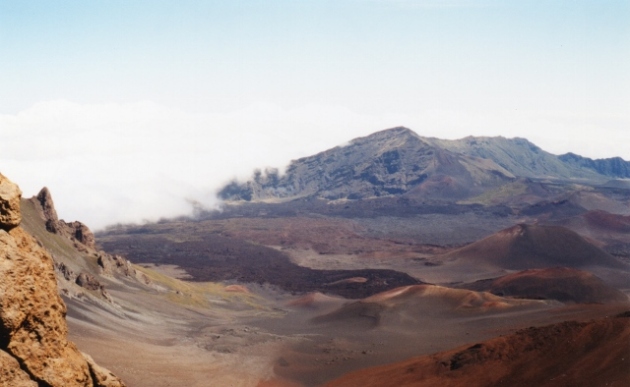 The changes in vegetation as we climb higher are clear, and at seven thousand feet we see unique silverswords: flowers not unlike sunflowers arranged as for groundsel; the spiky silvery base is quite lovely. The barren “crater” is a misnomer, as it is really two valleys fused together over time, but it contains a series of little cones. 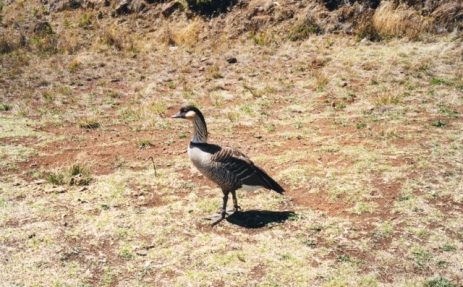 The Park Officer at the summit tells me of a pair of Hawaiian geese or nene, which are only to be found on this island, so on the way down our driver makes a detour into an isolated trailhead.  My Bird book of North America does not include Hawaii, so I take a photograph of this miniature version of the Canada goose, parading with peaceful lack of concern on the car park. 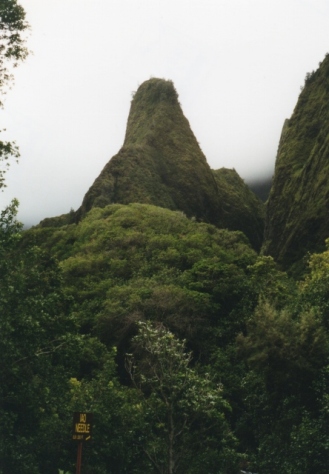 After a fresh fish sandwich at a local restaurant, we are transported to the west wing of the island, and look upwards at the Iao needle from a rain-forest within an overgrown crater. It presents a huge contrast to our morning experience – rivers, a verdant, humid valley, the green covered pinnacle and a mass of cloud with the sun occasionally peeping through.  We look over towards Haleakala, seemingly only a stone’s throw away, but it is  also covered with cloud.

We drive along the seafront to old town Lahaina (Peter tells us that you must pronounce every vowel in Hawaian words. They only have seven consonants). There is still a feeling of shock, and planes and buses are very empty; however, a few campers, sun-worshippers and surfers line the seafront. An arts bazaar is in progress under an enormous Banyan tree in old Lahaina, but the few customers are crowding round a group of energetic young drummers. I wander through a couple of art galleries. Local hero Christian Lassen, acclaimed surfer and environmentalist, produces striking oils. I see zebra, cheetah and lion, the work of a South African artist. Then I track down some juicy slices of pineapple, which are pleasantly acid-free. But prices here are utterly outrageous.

I’m glad I read James Mitchener’s Hawaii in preparation for my visit, as it gave me some excellent background history of the islands, and I’m looking forward to experiencing Pearl Harbour tomorrow.