A Man with REAL Dreams

Larger than life, and a computer geek to boot – but I’ve always believed that if you scratch the surface of one, you will find a delightful, fascinating character, and Thom Stark hasn’t disappointed. Click on the pic below and you’ll see what I mean… 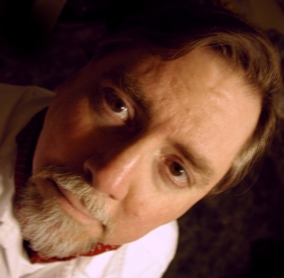 Thom – care to tell us a bit about yourself – what you do/did for a living before you became a writer in 1995?

At one time or another I’ve worked as everything from typesetter for a suburban newspaper to carnival roustabout to air switcher for a San Francisco independent TV station. Beginning in 1986, I became interested in computers, and worked my way up from computer tech for an A/V rental firm to Senior Research Analyst for Wells Fargo Bank. Eventually I became an independent consultant specializing in computer networking. Then I accidentally became a professional (i.e. – “one who gets paid for it”) writer. I’ve been doing that ever since. (I’d love to hear about your “accident” – but perhaps we’ll leave that to another day…) 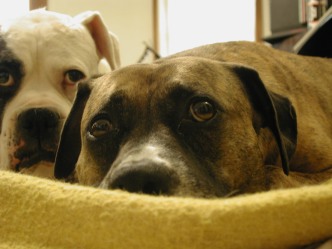 You are a versatile writer, who likes alliteration (your “loveable mutts” are named Watson and Wally – the pup on the left); tell us about the Boardwatch Magazine and the other very diverse publications you write for.

Well, my writing career started in the pages of LAN Times magazine. When new management replaced Susan Breidenbach, the editor who hired me, I wound up getting the boot, too.

Boardwatch was a very highly-regarded publication aimed at Internet Service Providers. Jack Rickard, who founded the mag, recruited me to write for it, after reading a feature article I did for Internetworks magazine on the IAHC’s attempt to expand the top-level domain structure of the Internet. It was pretty heady company in which to find myself, because some of the top scientists and programmers in the geek universe wrote for Boardwatch. While on the Boardwatch masthead, I wrote a monthly column called @internet, as well as occasional feature articles – most of which, I’m proud to say, were the featured cover story for the month they were published.

I’ve also written for various other computer magazines, including Byte and Cnet, as well as for local newspapers and Las Vegas Citylife magazine. I’m a member of ASCAP, as well, and I hold or co-hold copyrights on four dozen or so songs.

Prompted by the interesting gestation of your book May Day I have down-loaded your free 38,000 words. Reading the first few pages puts me in mind of Nine-eleven (referred to in a recent travel blog of mine!) How close does your book come to that event, and what was your reason for writing it? 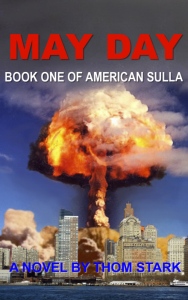 In fact, what happened to America following the 9/11 directly inspired American Sulla, the novel of which May Day is the first volume. So many times in the years since those attacks, I’ve heard people say how differently things would have turned out if Al Gore had become president, instead of George Bush, so I decided that having a liberal Democrat as president when Lower Manhattan is destroyed by a nuclear weapon was the right point of departure for the story of what might happen to this country and the world following an attack far more destructive than 9/11.

May Day is the first of your American Sulla trilogy. I had to google the name! Fascinating. Please tell us how you came to use this Roman political and military leader as your model.

Well, as you now know, Lucius Cornelius Sulla was a Roman general who was elected Dictator of Rome at a time when civil war and chaos swept the Republic. Sulla – who was the only Dictator ever to be appointed for a five-year term – put down the rebellion, then used his power to reform what he regarded as a badly-broken political system (as well as to settle personal and political scores). Before his term expired, he felt he had accomplished everything he had set out to do, so he stepped down as Dictator, handed power back to the Senate, and retired from politics.

I thought the notion of a President becoming a military dictator in the aftermath of a nuclear terrorist attack was actually a quite believable turn of events – and the temptation to use that power to try to fix our badly-broken political system would be an increasingly-irresistable temptation. The question of how that might play out – of whether a President could wield such power without becoming hopelessly corrupted by it – is the central conflict with which American Sulla wrestles.

What has been the most difficult aspect of writing and selling your book, and how did you address the problem?

The hardest challenge is the one all first novelists face: attracting an audience. How to make your voice heard above the clamoring multitudes is the principal difficulty all artists face, regardless of the medium in which we work. For me, one of the bigger obstacles to that effort has been the fact that my wife’s cancer treatment cost us our entire life savings, so the financial resources available to me for advertising have been essentially non-existent.

(Let me say that my beloved Judy – to whom I dedicated May Day – has been cancer-free for the past five years, and that makes the cost of her treatment completely worthwhile for me, despite the inconvenience it presents to my marketing effort.)

I am so sorry to hear about your wife’s cancer, Thom – and delighted she is now cancer-free. Our lives are somewhat parallel: my husband has been cancer-free for over twenty years, now; but he’s living with the consequences, and the change in our lives led to me completing Breath of Africa. If it’s any consolation, advertising my book was costly, and produced little in the way of returns!

What marketing methods have you used?

I’ve devoted a lot of time and effort to interviews such as this one, as my primary promotional strategy.  They do seem to help. I’ve also tried to leverage social media to help market May Day, and I think that’s also helped. And, too, I’ve sent out copies of the book to influential people, in hopes that one or another of them will decide to read, and then champion it. So far, that hasn’t been as successful as I’d hoped it would be … to put it mildly.

I recently joined an author’s collective called The Booktrap. The notion is that we cross-promote the group and each other’s books. Each member contributes his or her special expertise – I narrate audiobook excerpts of our members’ work, for instance. It’s still too early to tell whether our execution will be as good as the idea, but there are certain individuals who are putting tremendous amounts of energy and effort into it, so I’m hopeful that it will pay off for everyone.

Has it been worth your while publishing it in paperback format?

I think so. A number of my friends and family members have ordered copies of the paperback edition, despite its cost. I’ve also mailed proof copies to people who could be powerful allies, should any one of them actually decide to read the book – including President Obama (who you will recall remarked to the press that the possibility of a nuclear explosion in New York City was a bigger worry for him than Russia’s annexation of Crimea).

Do you have a wish list – what would you love to do / be / have if there were no barriers?

Well, I’ve wanted to be a spaceman since I was a child of six – since before the words “astronaut” and “cosmonaut” were invented, in fact. Given my increasing age and deteriorating health, that’s unlikely to ever happen, but it’s still my most cherished ambition.

I’d also very much like to follow on horseback the path of Alexander the Great’s military campaigns, but, given that his trail leads through some of the most dangerous territories on Earth (Iraq, Iran, Afghanistan, and the tribal areas of Pakistan among them), that, too, is probably out of the question. I’d still love to do it, though. Oh, me too! I went riding for a couple of hours in Cappadocia a couple of months back, and I’m afraid my old body kicked back at me. But there’s no harm in fantasizing.

And, of course, I’d jump at the opportunity to become immortal, invulnerable, and wealthy beyond the dreams of avarice – but, more realistically, I’d be happy to settle for merely becoming an author who’s successful enough at writing to make a living at it!

A man with REAL dreams – I love it! And now, Thom, I am becoming hooked on your book… you can read my review HERE

This entry was posted in Authors and tagged Alexander the Great, cancer, Lucius Cornelius Sulla, May Day, Nine-eleven, President Obama. Bookmark the permalink.

1 Response to A Man with REAL Dreams