A Treasure Hunt and a Jig-saw Puzzle Rolled into One

After three days in the hotel doing nothing but play bridge and read (thank heaven for my kindle), it was time for a trip to Perge; twenty euros each for 5 of us. Then it turned out the driver expected us to pay the TL15 each for tickets on top… 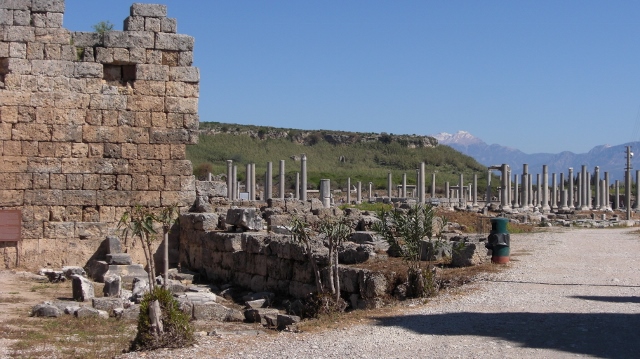 Ahmed left us to guide ourselves. I opened my Rough Guide and we picked up a leaflet map of the ruins. It was like a treasure hunt and jigsaw puzzle rolled into one. There were very few tourists in this fascinating place. 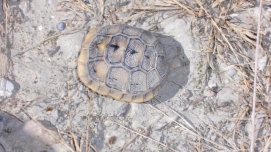 We spied two tiny tortoises as we roamed through the bath complexes, where a portion of marble tiled floor was exposed. 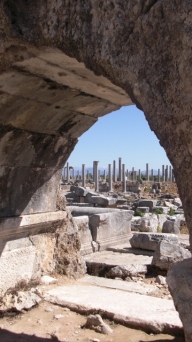 We strolled through the Gates and the two Nymphaeums – 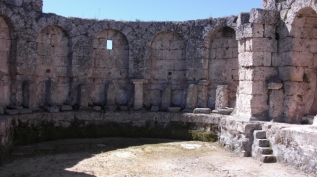 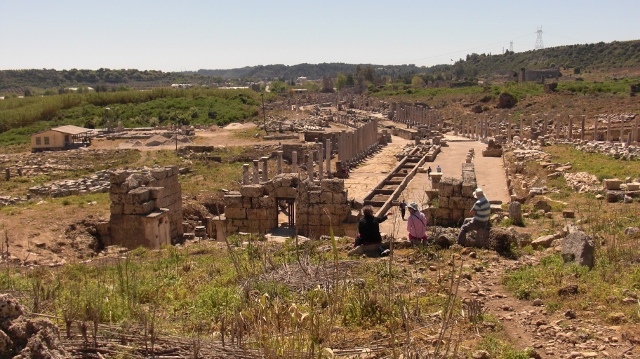 – and walked up the Colonnaded Street with its central waterway between lines of shops.

It was a fascinating blend of Greek, Roman and Ottoman dynasties. 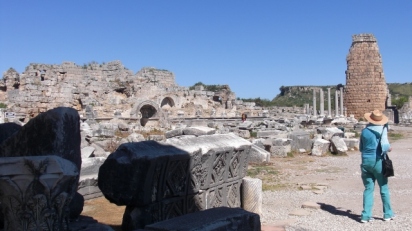 We wandered back through the ticket gates and into a ruined stadium with tiered stone seats and a partial view of the nearby theatre, cordoned off for ‘restoration’ at least nine years ago. I bought a turquoise necklace at a stall for TL20. It was a wonderful, stress-free three hours, exploring and wandering at leisure.

We were late for lunch, and Ahmed dashed us to a roadside café in Aspendos, where our hosts had prepared a Turkish-style lounging corner for us, draped in carpets … but the others made a bee-line for a conventional table in the far corner. 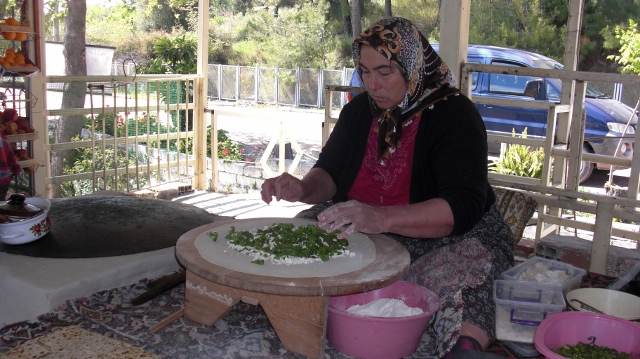 Glancing longingly at the carpeted corner, I lingered to watch  the mama preparing our stuffed pancakes (cheese and spinach) using a thin stick with great skill and baking them over a domed hot plate, frequently turning them with wooden paddles. The daughter dripped them with fat, folded and cut them into segments, before plating and serving with olives, cucumber and tomatoes. Absolutely delicious. We looked over groves of oranges, and Ahmed plucked one each for us to take “home.” Mine was juicy and tasted refreshingly sharp.

Our long and devious journey back to the hotel took us via a mosque, then off to wave at Ahmed’s relatives on the balcony of his house. He took us through windy byways. I wondered if this was his first group of tourists, he was young enough and he peeped the horn frequently, laughing as he saluted acquaintances along the way. A sly suggestion to Jim that he might want a girl? That was too much – we were looking for the post office to despatch our postcards, and he finally obliged. Ahmed had done very well by us; but we did have a most interesting and enjoyable time, getting back to the hotel well after 4.30pm.

The biggest surprise on a free day in Antalya was a compulsory visit to the D’Enver leather factory. We were herded into an auditorium; the curtains closed, lights dimmed, and into the spotlight walked Diana, clad in a sumptuous leather calf-length jacket with leopard and fur motif. She made a sophisticated model, rising beautifully to the occasion. The lights dimmed once again and we witnessed a professional catwalk show, featuring leather garments of mouth-watering richness. They trim the lambskin of  its outer membranes, leaving the soft fatty inner part to make the garments. Colouring is of natural ingredients. 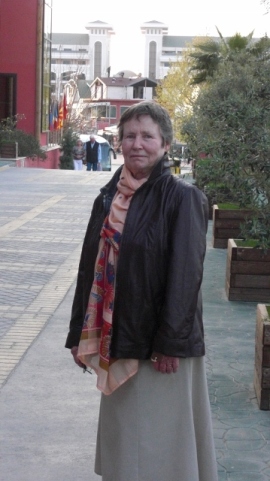 We were let loose in their shop for half an hour. I did not mean to buy, but found myself coming away with a magenta jacket – at one third of the asking price – to replace the rather frayed hand-me-down from daughter Heather ten years ago.

The elongated journey home to the UK was the usual travelling nightmare, and the taxi ride from Gatwick Airport to Polegate at 2.30am seemed as if it would never end. Most of us nursed sore throats and coughs in varying stages of development, and although it was not all bad, I resolved never again to be a package tourist.