The Trials of Travelling in a Foreign Country…

I’d never been to France; I don’t speak French, nor can I understand what they’re saying. But I can sort-of get the gist when I dig deep into my memory of O-level written French.

I wake up, ready to be collected at 6am, only to discover a message from Carrie-Ann saying she is coming fifteen minutes earlier. I rush through my ablutions, grab a glass of cranberry juice to swallow down my daily pills, and run out to the car, its headlights glowing along the street.

At Gatwick I sampled the inner workings of checking in. Carrie-Ann had pre-checked her bag into the hold, but when I tried, I baulked at the £37 price. We went towards security. I was ready with my bottles and tubes visible in a plastic bag – but my special body lotion was too large, and no way was I going to sacrifice it. The man at security was very helpful. I could go back and check my case in “hands free”. He suggested I asked for assistance. We submitted ourselves to rigorous exit security (passport, stand in the specified area and have our faces scanned) before retracing our steps.

This time, an attendant was at hand to work the machine while I played helpless at her side. It worked! A five pound swipe with my card and a preferential tag on my case, before we returned to security and sailed onto the Easyjet plane for the smooth ninety minute flight to Toulouse.

It took some trudging along hard pavements while my companion used her mobile google map to find the shuttle to Matabiau train station. And we nearly booked ourselves on the coach instead of the train to Carcassonne.

Forty-one minutes through parched harvested countryside, the Pyrenees rising dimly in the distance. We took an earlier train than planned, so Steph didn’t meet us in her car at the station as arranged. We’d be able to walk to our Airbnb cottage on Rue Arago and back to our publisher’s home near the Canal du Midi for a welcoming barbeque.

Carrie-Ann brought out her mobile with confidence, and once she’d established the orientation, we walked through a square of fountains and up dusty streets dragging our luggage. Laborious, uphill. Even though I’d been sitting for many hours, my legs ached. We stopped in front of a wooden red door in a rickety frame and rang the bell. Denise opened it in a fluster. It was only 3pm, we were early, and she wasn’t ready! We needed to spend a penny; she showed us quickly round; we left our luggage out of the way under the stairs, and she gave us the key to get in, showing us how to unlock the door. Then we were hustled out to kick our heels for half an hour.

Narrow, one-way streets, drab, with tiny pavements; cars creeping by as we cringe against the walls. 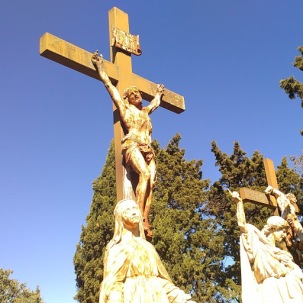 The Garden of Calvary, Carcassonne

We turned a couple of corners, and happened on the Garden of Calvary, the Bastion Saint-Martial. A rocky, overgrown place with winding path punctuated by niches on either side, depicting the stations of the cross in dramatic stone carvings. We rested on the step with our backs to the “judas kiss”. Carrie-Ann didn’t like the creepy atmosphere of the place, but I wanted to explore further. Glimpses of three giant crucified figures, touched by the golden sun, rose through the tangled trees above us. Bravely, she followed me. The crucifixion scene, too large to encompass in a single photo, confronted us. We wandered round the small bastion, dallying before each niche, and the minutes sped by.

Denise had gone – and we couldn’t unlock the door. We hadn’t listened properly to her instructions. We both tried twisting, turning, pulling and pushing, in efforts to uncover its quirky warp. Despairing, I looked over my right shoulder towards a neighbour, who was showing signs of offering assistance – when suddenly I happened to pull and push at the right moment. Voila!

2 Responses to The Trials of Travelling in a Foreign Country…