The Location Chose Me

I am delighted to introduce new author Rosie Travers in my series on settings for books.

I thoroughly recommend the read, which took me away from my trials and tribulations into a wonderfully contrived, fast-moving story with all the ingredients of love, intrigue, endeavour.  Over to you, Rosie.

My debut novel, The Theatre of Dreams, is set in the fictional resort of Hookes Bay on the Hampshire coast and tells the story of an unlikely trio of characters who conspire together to save a neglected seaside pavilion from demolition.

Choosing the location for my story was easy, actually I think it chose me. Inspiration can sometimes strike in the most unlikeliest of places. Lee-on-the-Solent is approximately 8 km west of Portsmouth, in the borough of Gosport. As its name suggests, the town sits on the Solent, facing the Isle of Wight.  This is whole area is synonymous with Royal Navy activities – barracks, armouries, submarine stations, airbases. It’s not a holiday destination – or at least it isn’t today. 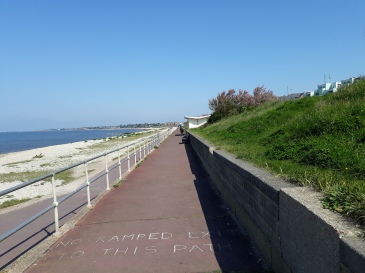 But Lee-on-the-Solent has a past – back in the late Victorian era, before the arrival of the Navy, the town attempted to establish itself as a resort. A pier was built, the railway line extended, and grand houses constructed along a marine parade. Then in the 1930s, an Art Deco entertainment complex comprising a ballroom, restaurant and cinema was added on the esplanade, topped by a 120 ft observation tower. Lee’s glory didn’t last long. The pier was destroyed after the second World War while the tower complex only lasted until the 1960s – the archetypical white elephant.

I knew nothing of any of this until a couple of years ago when taking a walk along the blustery and somewhat exposed seafront I came across a notice-board commemorating the site of the historic complex. Where once there was something quite unique there was now just a promenade and a car-park. How could they have let this happen? I thought. Why wasn’t this glorious Art Deco building preserved?  It seemed a travesty.

My imagination was well and truly captured. I conducted some online research, uncovering a whole bevy of Art Deco pavilions dotted across the country. I read about the De La Warr pavilion further along the coast at Bexhill-on-Sea in Sussex – restored into a contemporary arts centre after a public campaign and wondered why this hadn’t that happened at Lee.  Where was the vision, imagination, determination, ingenuity, oh, and the money of course, to conserve this little town’s slice of cultural history?

And so an idea was born, although I have downsized events for my novel. In The Theatre of Dreams my two leading ladies don’t need an observation tower and an entire entertainment complex to bring them together, just something small and meaningful – a family run theatre.

Hookes Bay is purely a figment of my imagination. Yes it does have some similarities to Lee – they share a pebble beach, they have a promenade, but Hookes Bay still has the remains of its pier, and of course, its Art Deco pavilion. Or at least it does at the start of the story…

Musical Theatre actress Tara is down on her luck and in need of a job. When terminally ill octogenarian Kitty invites her to take over the running of her former dance academy in the old fashioned resort of Hookes Bay, Tara thinks she’s found her guardian angel. But it soon becomes very clear Kitty is being far from benevolent. Too late Tara realises helping Kitty will signal the end of an already tarnished career, unless she can pull of the performance of a lifetime.

2 Responses to The Location Chose Me