The Spiral of Hooves Tour

Welcome to this hitching post on The Spiral of Hooves Blog Tour celebrating the August 7th launch of the second edition of Roland Clarke’s equestrian mystery, “Spiral of Hooves”.

I just loved this book – it is so like a Dick Francis novel, but set in the eventing world instead of racing. I strongly advise you to comment on this blog, to have a chance of winning a free signed paperback copy! 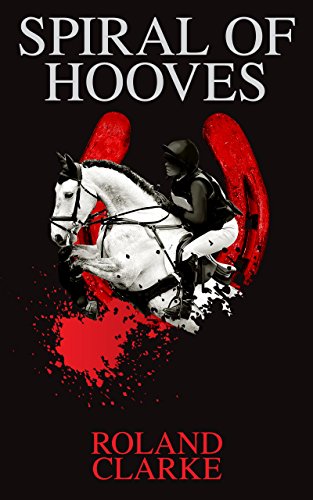 “Spiral of Hooves” is an enthralling mystery full of twists, turns, and suspense set against the competitive equestrian world of eventing. Characters are thrown together from different countries by their ambitions, ideals and desires, and by their passion for horses. Relationships are tested and challenges surmounted as the mystery builds.

In Canada, researcher Armand Sabatier witnesses what could be the murder of groom Odette Fedon, but traumatic images from his past smother his memory, and a snowstorm buries the evidence. Harassed by nightmares but fighting through them, Armand remembers the crime a few months later. By then he is in England, where he is dragged into a plot involving international sport horse breeding.

Suspecting everyone around him, Armand is forced to brave the past that he has kept buried. But what made Armand leave France? Where did he learn to survive and fight for justice? Why is the English rider Carly Tanner treading the same path as the first victim, Odette?

Can he save Carly before he has more blood on his hands?

Spiral of Hooves is available from Amazon on Kindle and for the first time in paperback – https://bookgoodies.com/a/B073W3CLDV

Roland Clarke is a retired equestrian journalist, photographer, and event organiser. Sadly, Multiple Sclerosis clipped his wings, and he was unable to meet deadlines or get to equestrian events easily. Recently, his wife Juanita and he moved with their two dogs, Quetzal & Treeky to Boise, Idaho having lived in Harlech, North Wales for over two years.

How did “Spiral of Hooves” originate?

The novel arose from observations made during my years as an equestrian journalist, right back to my brief time at ‘The Field’. In my twenties, I had a rough idea for a story involving a Canadian and an English rider, but while watching a horse show in about 1998, the idea began to evolve. Although the first edition of “Spiral of Hooves” took me thirteen years to complete, I used my experience of the equestrian world to develop and refine the novel. The Second edition allowed me to address some of the questions raised by reviewers of the first release and correct some typos, I hope.

Why a Canadian? Aren’t you British?

I was born in England although my mother was Anglo-Chilean and my father was English. I spent a few years studying near Montreal, in the French part of Canada and that sowed the seeds of the novel before I even started on my equestrian career. A part of me dreamt of living in Canada, but I’ve ended up in the Idaho, USA – where the sequel to “Spiral of Hooves” will be set.

Is the sequel written? Does it involve more eventing?

“Tortuous Terrain” has yet to progress beyond draft one, but it has some of the characters from “Spiral of Hooves” so there is some eventing. However, the mystery to be solved by the main characters this time revolves around the threats to two sisters, one an endurance or trail rider and the other a barrel racer.

How much of your books is realistic?

I set “Spiral of Hooves” in the eventing world, so elements had to be realistic. All the shows are based on real events, so where possible, I tried to give a sense of the settings, using, for instance, some fences that I knew were on the cross-country courses. Some of the actions and reactions are based on interviews with riders, veterinary surgeons, breeders, etc. I had to ensure that my colleagues in the sport would recognise elements, and then accept that the fiction was possible. “Tortuous Terrain” requires more research as the setting is less familiar.

Have you ever met the characters in “Spiral of Hooves”?

Is there a message in your novels that you want readers to grasp?

Is there anything you find particularly challenging in your writing?

I attempt to be an MS Warrior and keep writing. However, the toughest challenge is finding time to write when multiple sclerosis is draining my strength. Beyond that, I struggle with the editing, never quite sure how to improve my drafts. I’m better at plotting the original story.

Do you have a blog/website? If so what is it?

I blog erratically at http://rolandclarke.com. Please drop by and say hello.

Please make a comment below if you would like to be entered in the Giveaway for a signed copy of the Second Edition of “Spiral of Hooves”.