After lunch we cruise to Punta Suarez point on Espanola in readiness for a three-hour afternoon stroll. This is the most varied walk of the week. With about 8-9 other groups we embark for our “dry landing”, only to find that the concrete steps are occupied by lazy sea lions, so we have to get out onto slippery lava boulders to avoid them. They ignore us utterly, unless we step too close, in which case an irritable  turn of the head, or a warning bark makes us move smartly away. However sleepy they seem, a wary eye is always on the look out. 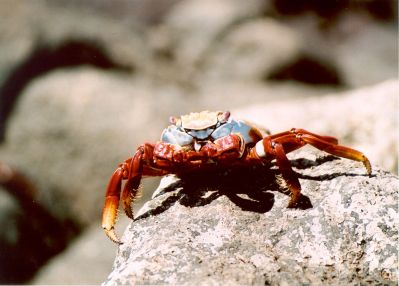 A customary pause on the beach while Billie waits to see where the other tours are heading. Then he leads us away to the left, to do the circuit backwards at our own pace. We stop in the only shade on the island while he tells another story, this time about the sally lightfoots, great orange crabs which cover the rocks in their millions.

We clamber through the boulders up to the flat ground towards the cliffs on the far side, getting nearer and nearer to the albatross nesting grounds. I have been looking forward to this ever since I booked the tour, for I have never seen an albatross. The verses of Coleridge’s Rime of the Ancient Mariner have rung in my ears ever since my school days.

Suddenly we are there. Just an ordinary clearing of scrub, and a pair of 7 month-old juveniles are sitting together amid the boulders, with an adult couple resting a few yards further on. Under a bush we surprise a lone adult, and some excitedly track him as he flounders awkwardly towards the cliff edge.

“Don’t frighten him!” I cry, hanging back. After maddening pauses and hesitations, he spreads his enormous wings and takes off. High above us, more birds glide majestically on their wide thin wings. They are so elegant in the air. We follow a cliff path and come across a courting couple touching bills, the larger male strange with his pronounced eyebrows. They ignore us totally. I could stay watching for hours.

But time is passing. A colony of masked boobies, chicks on some nests, courting couples near others, make a striking picture against the lava rocks. There seems to be no set season for any of the birds on the island. We pause beside a horde of iguanas. They’re different on every island. The sally lightfoot crabs are everywhere, sometimes crimson or even black, depending on their stage of development.

Back to the bay, and the blue-footed boobies are again in action, sometimes diving together in perfect synchronisation, searing through a shoal of fish in the shallow waters, then turning to snatch a tasty morsel on the way back to the surface. And off again, flapping effortlessly up from the sea to start the process all over again. 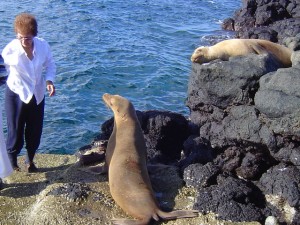 We join the queue at the landing stage, waiting for our transfer back to the Guatanamera. The sea lions are still in occupation, and everyone has to negotiate perilously slippery rocks before getting into the landing craft.

We have supper followed by the customary briefing for the next day before the whiteboard. The crew appear with complementary drinks, and try to whip up a party spirit among us with loud music and the promise of dancing. But all we want is to retire to our beds. It isn’t long before I put the light out. I’m getting quite agile now, climbing up and down from the top bunk like a teenager.

2 Responses to The Majestic Albatross