Ecuador, 2005. We have to be at the station by 6 am to claim the best seats on a special tourist train journey to the Devil’s Nose, and there is a fierce scramble for them.  Five of us climb onto the carriage roof, with cushions to guard against corrugations; two make a beeline for the engine; and the remainder pack into the last carriage, which has conventional seats.  As the time for the 7am start approaches, more and more people crowd on, and we appreciate Diego’s foresight. 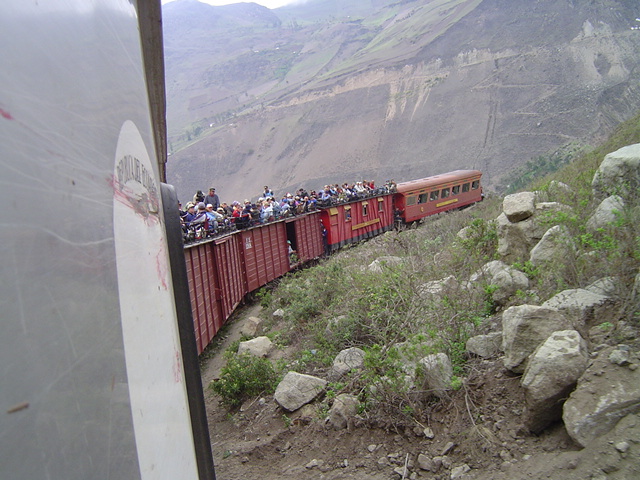 Spectacular views of Mt. Chimboraozo, through the deep valleys and steep hills.  I doze awhile, then rock to the back of the train and stand on the platform watching the rails enfold behind me, admiring the amazing scenery, and taking far too many useless photographs.  The three freight trucks in the middle of the train are topped with tourists, who throw handfuls of sweets down to wayside children, scrabbling beside the track.

We stop at a station, and there is an immediate queue for the toilets, a communal affair.  An enterprising local lady stands at the entrance for the 25c fee, for which she hands out paper.  Ladies to the left in cubicles, gents to the right against the wall.  When you finish, a cheerful youth is there with his bucket of water for flushing.

Toilet protocol throughout Ecuador is standard:  you discard soiled paper into a nearby bucket, NOT the toilet, or it will be forever blocked.  Water is usually available, and most places are clean and tidy.  In one ladies’ room, two of us stand up simultaneously in our low-walled cubicles to pull up our pants, and those waiting in the queue are treated to a comic sight as faces suddenly appear over the wall. 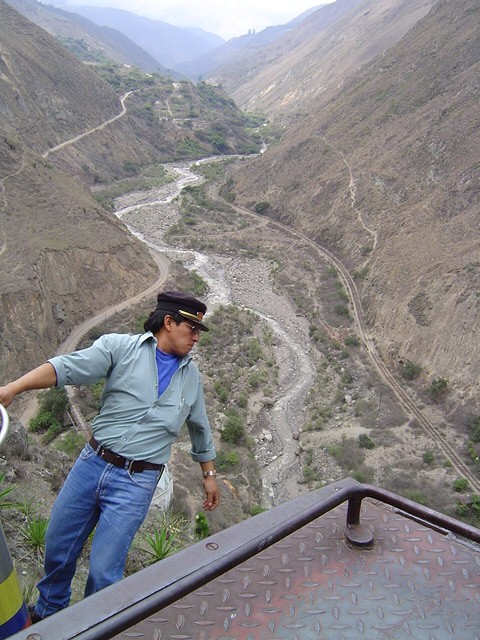 After the short stop, I decide to try the roof.  The engine emits its exhaust directly into my face, but at least it is warm, while others further back huddle into their jackets against the biting wind.  It is quite a party up here, with people rocking precariously on the corrugated roof, and some brave souls standing up. I am able to take a classic tourist picture.

When the train stops before the descent of the Devil’s Nose switchback, I join the engine-driver. 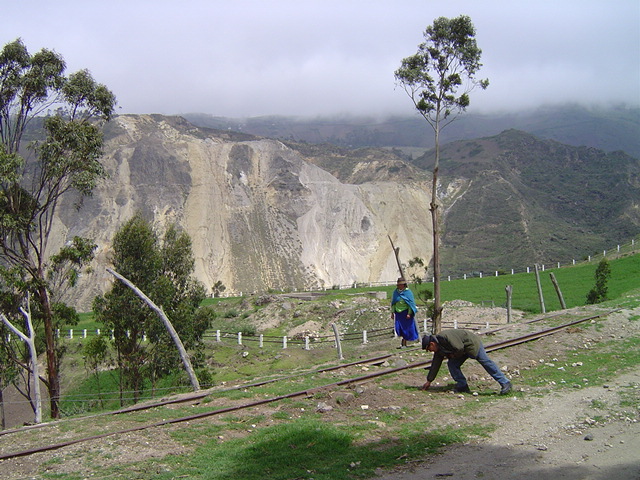 The spectacular scenery cannot be appreciated from mere photographs.  There are new deep valleys and steep mountains at every turn.  The little train trundles along the ancient tracks, some almost embedded in the sand.  Mini landfalls are created at intervals.  Derailments are frequent, we are told, but never serious.  We stop once or twice beside track-side workers. 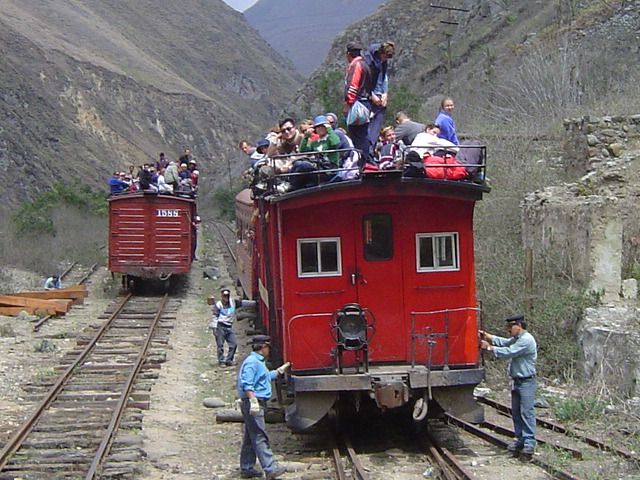 We wind round and round and round, and eventually with a screech of brakes, come to a dead end at the tip of the Devil’s Nose. A valley spreads out far below.  Then the brakes are released and the train coasts backwards along the track.  Back and back.  And there is a frown of intense concentration on the face of the engine driver beside me.  Down and down we go; then we stop. A second track appears beside us. The guard steps down and switches the rails.  We go forwards again, slowly, to the bottom of the valley, where with a series of intricate manoeuvres and shuntings, the carriages are switched round and the engine ends up again at the front of the train for the long haul back up to the station.

Now, I believe I sort-of understand how a switchback works ….  The whole journey takes over six hours and goes like a flash.

3 Responses to The Devil’s Nose Switchback