Thought you might like a break from Australia for a week – so let’s go over to London for a change, where I spent the day last Saturday with our walking group.

London never fails to fascinate me and I always look forward to our annual trudge along the Thames walk, soaking in the atmosphere and the history of this most varied city. Thirteen of us divided into two sensible groups aiming for the Tower of London in a roundabout route, for the Circle and District Lines were closed that day.

We joined the hushed crowds hanging over the railings and strolling sedately round the perimeter. The view over the moat facing the Tower walls was breath-taking. “Blood swept lands and seas of red” lay before us in the form of a growing myriad of ceramic poppies, each representing a British or colonial military fatality during the First World War. Orange-coated volunteers casually patrolled the area, pausing to take their own photos while shutters clicked continuously over their heads. We offered private prayers, before entering once more into the maw of London’s underground.

All went well, until we boarded the sleek DLR train, which whisked us eastwards to Canning Town. Our aim was Pontoon Dock. We were Julie’s group, and were rather too slick with the change, finding ourselves back where we’d started. But there on the platform was Jane’s group, who’d done exactly the same thing.

Oh well, we just had to repeat the exercise – more carefully this time, before emerging at Pontoon Dock and making a beeline for the Info Centre toilets.

We strolled alongside a sunken garden of wave-like hedgerows towards the river and sat on a bank to munch our sandwiches, facing the grey shapes of the Thames Barrier.

To the east, murky clouds closed down on us, and ghostly shapes of tall ships, riggings bare, slid silently between the pontoons. The Barrier, we learned, closes under storm surge conditions to protect London from flooding from the sea, and can also reduce the risk of river flooding in west London.

Back to the station for the ride under the Thames to the South Bank, where we walk between stalls of exotic Afro-Caribbean produce and bypass the remnants of the famous Woolwich market. A totally different world greets us as we enter the Tall Ships Festival site of Woolwich Arsenal and run the gauntlet of brash amusement stalls, balloons, loud music and a merry-go-round. Patient queues back onto the walkway, waiting for a ride on the river. 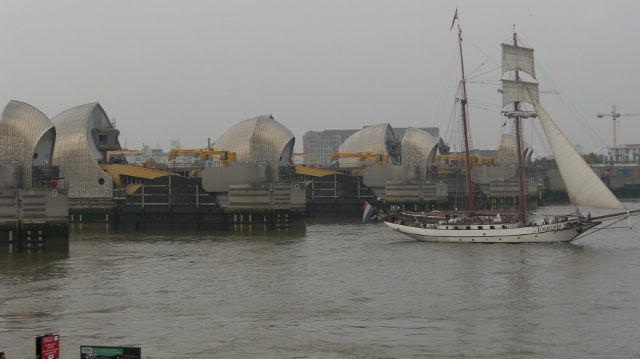 We turn westwards at the start of the 3.5 mile Thames walk to the O2 Arena, but I am utterly disorientated. It feels as if I’m walking east, but Julies assures me we’re going west. It doesn’t help that the sun is on my left, for we’re on a bend of the river. But as we come to the Thames Barrier from this side, the sun glints through the clouds, clothing this man-made wonder in soft gold. A tall ship, sail unfurled, slips through and catches the rays.

Our path diverts for half a kilometre through an untidy corner; and a cable car crossing from the O2 Arena in the muted evening sunshine marks the end of our walk – but not the end of our adventure, for we return to Victoria Station in the weekend rush.

The door closes on a packed carriage before Julie can jump aboard.

“We’ll meet at Victoria toilets,” she shouts, stepping back to await the next tube.

As we jostle through the ticket barriers and climb the steps, suddenly Julie is with us. Our train leaves in ten minutes. We head for Platform 16, then hesitate.

“I’ll go back and look for her,” says Jane. The minutes tick by and it’s a long walk to the front part of the train; in the nick of time, they re-join us.

We crowd into carriage No.8. But contrary to the station information board, the canned voice tells us to go to the first four carriages and the rolling display confirms this.

We approach Haywards Heath, where the train divides. A new “live” voice tells us that eastbound passengers must be in the first 8 carriages, and there immediately follows a canned voice contradicting the instruction. People get up to go in different directions, but Jane encourages us to stay put. There is a last minute panic as westbound passengers rush out through the closing doors.

AndJane is right, after all.