The Rain It Reigneth Every Day

Wellington  is a hilly city huddled against the wind and the rain. The weather has finally caught up with us. We drive up Mt. Victoria in time to catch the view before the clouds roll in. The hillsides are so steep, some houses have cables running up to their front doors from the narrow winding road beneath.
We drive past the Parliament building and the “Beehive“, but there is no time to visit the museum, as we have to catch the Interislander Ferry. Three hours of plush time-passing follows on this enormous vessel. People taking refreshments, propping up the bar, playing one-armed bandits, watching CNN, or just sleeping in airline chairs. The crossing is a “good one,” a chance acquaintance tells me; the sea is fairly calm, unlike the previous week when the crossing was cancelled due to bad weather. But I cannot see a thing the whole way, for relentless rain and infuriating low cloud. Oh well – at least the Picton and Nelson farmers are happy, as their rainfall is low this year.
I leave the tour at Picton and catch the Knightline bus to Nelson, a serviceable 9-seater reminiscent of the matatu in Kenya. It stops raining as we wind along narrow flat valley floors threaded with streams, between steeply rising pine-covered folding mountains. We pass through vineyards, numerous deer farms, more sheep, and some cattle. I cannot see the tops of most of the surrounding hills as they are steep and covered with cloud. Just before diving into Nelson by the sea, the road takes us winding upwards over passes covered with pines. And then it rains again.
I spend the night in a Youth Hostel, writing my diary in the hushed lounge while next door some Korean youngsters watch TV.
The drive to Greymouth is scenic: larger fields, more forests, valleys between folded mountains. Grapes, apples, kiwi fruit. We go through Wakefield in the blink of an eye. A sleepy village in a little valley within easy reach of civilisation, but an ideal place for hibernating retirement. We pass by many rivers, great and small. Some of them are a translucent brown colour, from running over fallen leaves further up the steep slopes. Then we drive over dramatic passes, the road twisting up and down as the landscape changes and we approach the west coast. 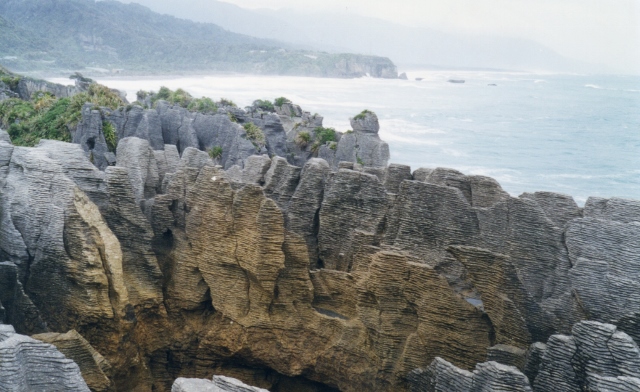 We stop for lunch at the Pancake Rocks and wander along a well designed walkway which meanders at the sea’s edge. The tide is in, making several blow-holes act in spectacular fashion. We drive past a coal mine and some abandoned gold mines. Then the weather closes in again.
The transalpine train from Greymouth re-traces some of the bus route before branching inland. It rains and rains, so we miss the rising mountain views as we pass in and out of tunnels up to the top of Arthur’s Pass. A few of us brave the weather in the open carriage for a while, gazing at the rain-lashed river bed and faintly snow-topped mountains peeping through the clouds.
The further down we race towards the east coast, the brighter it becomes and we are at last able to gape back at the wild splendour of the scenery which gradually give way to vast fields of sheep, then deer, the occasional horse, and the Canterbury Plains into Christchurch as the sun begins to set. 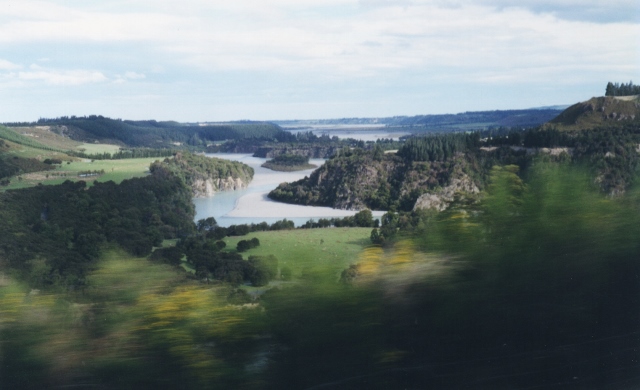 I’m taking a break now – no more blogging for a couple of weeks. See you in Queensland, where my University is holding its very first Bookfest, and Breath of Africa is one of the door prizes!

This entry was posted in Travels and tagged Greymouth. Bookmark the permalink.

2 Responses to The Rain It Reigneth Every Day