Other Worlds Through Other Eyes

I am privileged to host a valued friend and distinguished Historian Dr. Mark Patton, today.  An erudite academic, Mark presents an intriguing insight into the machinations of writing a historical novel.

Voice and Setting in Historical Fiction.

As a writer of historical novels, I take it for granted that my readers want me to take them on an imagined journey through a distant land: a land that may well be distant in terms of space (I’d like my books to be enjoyed by readers all over the world), but which is, by definition, distant in time. More than that, I will try to show that world to the reader not through my own eyes (I do that when I write non-fiction), but through those of someone living at the time. I must first imagine myself into that position, rather like an actor imagining myself into a role.

How would such a person see and understand his or her world? What metaphors and similes would come naturally to him or her? How would he or she classify things? If I am writing about the 19th Century or the 18th Century, I would certainly look for clues in the works of George Eliot or Daniel Defoe. When I write about Roman times, I have fewer sources to guide me, and when I write about prehistoric times, I have none. Where, then, do I start?

Undreamed Shores, my first novel, set in 2400 BC, opens like this:

“On a warm afternoon in the Month of Bluebells, four boats slipped from the white sand into the turquoise sea.”

Bluebells on the Island of Sark

Why “the Month of Bluebells?” Well, we don’t know how Bronze Age people divided up the seasons. “Months” are likely to have been related to the waxing and waning of the moon and, thinking about the Channel Islands, where both I and my protagonist grew up, bluebells are one of the most noticeable aspects of the month we call May. Hence, the Month of Bluebells. One has to be careful: I originally planned to use “the Month of Snowdrops” for February, until further research revealed that snowdrops were introduced much, much later.

“On a bright afternoon in the Month of Ground-Roses, four boats slipped from the golden sand into the turquoise sea.”

The device of linking a book’s opening and closing lines is a tried and tested one, probably used by story-tellers back in the days of woolly mammoths, but why has the white sand become “golden?” At the beginning of the book, my protagonist, Amzai, has no knowledge of metals. During the course of his journey he is introduced to gold and learns how to work it. “Gold” has become part of his consciousness, and he can use it as a metaphor as well as making it into jewellery. 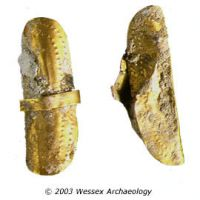 Amzai’s journey takes him to a land that lies beyond what he has believed to be the limits of the world. To make sense of that world, and survive in it, he has had to master two languages that are entirely new to him. I have tried to imagine how this process would have seen to him:

“A thought flashed in Amzai’s mind like a spark catching on dry tinder. Jusip spoke differently from Nanti…Nanti’s voice rose and fell like the song of a blackbird, full of soft “ssshu” and rounded “orr” sounds, like water flowing over pebbles or boiling gently over a fire. Jusip’s was more guttural, with hard “kke” and “gge” and “hle” sounds, like the chattering of starlings, or the sound of grain being ground in a quern.”

A stone quern for the grinding of wheat and barley.

Birdsong would have been far more noticeable in a world without cars, planes or even the neighing of horses. Any child old enough to be able to walk and talk is likely also to have been skilled at the most basic of tasks: the tending of fires and the grinding of grain for bread.

In the process of imagining this world, I found myself drawing on an extraordinary range of my own life experiences: from youthful nature rambles and camping expeditions; to sailing and swimming in the English Channel; to my more recent attempts at making myself understood in countries where I don’t speak the language. I also walked the route followed by Amzai from Abbotsbury in Dorset to Stonehenge, making notes on everything I saw, heard, felt, smelled and tasted, and all the time asking myself how Amzai’s perceptions of them might have differed from my own.

Mark Patton’s novels are published by Crooked Cat Publications. Further information can be found on his website (www.mark-patton.co.uk) and blog (http://mark-patton.blogspot.co.uk).

You can find my review of his excellent first novel, Undreamed Shores, HERE (Sorry – you need to scroll down to the second bottom of the list!)