The Wilds of Tribal Scotland

Once again, I’m delighted to welcome good friend Nancy Jardin who has exciting news. I can’t wait to get my hands on the latest of her stories set in the wilds of tribal Scotland – even though some of the names are unprounceable, let alone unspellable.  I’m also privileged to have met Nancy in the flesh, and her methodical  approach to promoting her books is an example to us all.

It seems a while since I last dropped into your lovely blog but I’m absolutely delighted that during this return visit I can share that Agricola’s Bane, the 4th book in my highly acclaimed historical fiction Celtic Fervour Series (published with Ocelot Press), is now available to Pre-Order from Amazon! Paperback versions will also be available in November from Amazon. The official online EBook launch will take place on the 15th of November 2018, with a physical paperback book launch event on November 22nd at a local Heritage Centre in Aberdeenshire, Scotland. 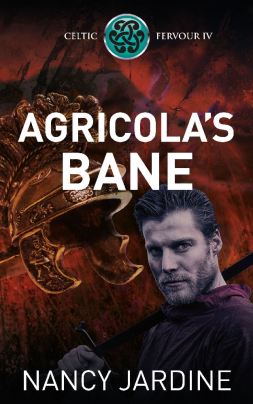 Agricola’s Bane continues the tales of my Celtic warrior clan from the Brigante hillfort of Garrigill (modern day Cumbria/Yorkshire border). As before in the earlier books of my series, my aim is always to tell the story of what happens to my relatively ordinary tribal folk who have been uprooted by the Ancient Roman invaders. My Garrigill clan’s refugee status persists since the Ancient Romans still dominate the landscape of the Taexali northern lands (Aberdeenshire), the Garrigill clan’s tough trek northwards in Book 3 sadly not leading to the freedom from the Roman yoke that they had hoped for.

Agricola’s Bane features second-generation Enya of Garrigill. The location is Caledon territory (Cairngorm Mountains, Aberdeenshire) where most of the tribal warriors, who have survived a recent battle, now take refuge. However, circumstances force some of them to venture forth from their relative safety at Ceann Druimin, the roundhouse village of Chief Lulach. Going anywhere near the Roman legions means risking a stabbing death under a Roman gladius but Enya and her warrior companions find the traitorous Vacomagi tribe can also be just as dangerous.

Roman General Agricola discovers that conquest of the Caledonian tribes isn’t as easy as he expected. The local warriors are very adept at guerrilla warfare and they behave in ways that both confuse and irritate him, much like his capricious Emperor Domitian. Time is running out for Agricola since he’s already on his seventh summer campaign season but he still wants to achieve so much more during his domination of Britannia.

Although my second generation Garrigill clan members are in their early to mid-teens, well-old-enough to be a trained warrior back in late first century A.D., Enya’s father and her uncles – Lorcan and Brennus – still have a small part to play in Agricola’s Bane as do the other female clan members of earlier books.

A reader new to the series can read Agricola’s Bane as a stand-alone novel, though they would most likely enjoy it even much more if they have read Books 1-3 of the series.

Nith of Tarras aids Enya of Garrigill in the search for her kin, missing after the disastrous battle at Beinn na Ciche fought between the Caledon warriors and the mighty Legions of the Rome. Enya soon has a heartrending choice to make – should she tread Vacomagi territory that’s swarming with Roman auxiliaries to find her brother? Or head south in search of her cousin who has most likely been taken captive by the soldiers of Agricola?

General Gnaeus Iulius Agricola – Commander of the Britannic Legions and Governor of Britannia – is determined to claim more barbarian territory for the Roman Empire, indeed plans to invade the whole island but finds not all decisions are his to make. It increasingly seems that the goddess, Fortuna, does not favour him.
The adventures of the Garrigill clan continue…

You can buy Agricola’s Bane via this Amazon Pre-Order Universal Link.

A member of the Romantic Novelists Association, the Scottish Association of Writers, the Federation of Writers Scotland and the Historical Novel Society, her work has achieved finalist status in UK competitions.

She lives in Aberdeenshire, Scotland, with her husband but life is never quiet or boring since her young grandchildren are her next-door neighbours. She regularly child minds them, those days being cherished and laughter filled.

You can find her at these places:

Many thanks, Jane, for giving me the opportunity to visit you again. – Nancy

2 Responses to The Wilds of Tribal Scotland